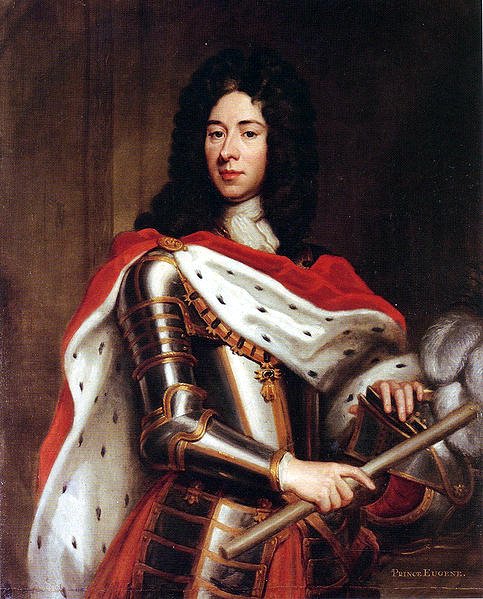 Eugene of Savoy (German Prinz Eugen von Savoyen, French François-Eugène de Savoie, Italian Eugenio di Savoia-Carignano; October 18, 1663 - April 21, 1736) - Prince of Carignano, commander of the Holy Roman Empire of Franco-Italian origin, generalissimo. Along with Moritz of Orange, Wallenstein, Gustav II Adolf, Turenne, Great Condé, Montmorency-Boutville, Vauban and Marlborough, he is one of the most prominent and most influential European generals of the New Age up to the period of the Seven Years' War.

Eugene was born in Paris. He was the fifth son of Prince Eugene-Maurice of Savoy-Carignan, Comte de Soissons, and Olympia Mancini, niece of Cardinal Mazarin. From his father's side, Eugene belonged to the ancient family of the Dukes of Savoy, being the great-grandson of the Duke of Savoy, Charles Emmanuel I. After his mother was expelled from France in connection with the case of poisons, 20-year-old Eugene went to the fields of the Great Turkish War to defend Vienna, besieged by the Turks, where a regiment of dragoons fought under his command. After that, Eugene of Savoy took part in the liberation of Hungary from Turkish troops in 1684-1688. In 1690, he was appointed commander of the Austrian troops in Italy and joined with Victor Amadeus, Duke of Savoy. The latter, contrary to the advice of Eugene, joined the battle with the French at Staffard, was defeated, and only the courage and diligence of Eugene saved the allied troops from final death. In 1691, Eugene forced Marshal Katin to lift the siege of the Koni fortress; in the same 1691, with the vanguard of the army of the Duke of Savoy, he invaded Dauphine and captured several fortresses. In 1697, he won a brilliant victory over the Turks at Zenta, which contributed to the conclusion in 1699 of the Karlovitsky Peace, beneficial to Austria.

During the War of the Spanish Succession in 1701, appointed commander-in-chief in Italy, he made the difficult crossing of the Tridentine Alps and, after victories at Capri and Chiari, occupied Lombardy as far as the Olio River. He began the campaign of 1702 with a surprise attack on Cremona, and Marshal Villeroi was taken prisoner; then very skillfully defended himself against the superior forces of the Duke of Vendôme. Presidential Appointment