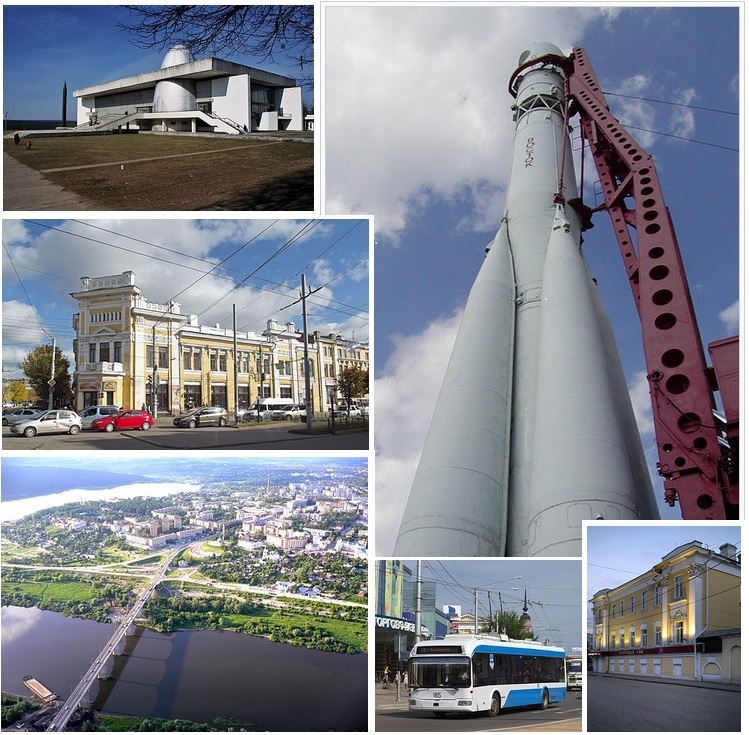 Kaluga is a city in the European part of Russia, in the Central Federal District, the administrative center of the Kaluga region and the municipal formation of the city of Kaluga with the status of an urban district. Located on the banks of the Oka and its tributaries - Yachenka, Kaluzhka, Kiyovka, 160 km south-west of the center of Moscow, 143 km from the Moscow Ring Road. Population - 331 842 people (2021). Railway stations: Kaluga I and Kaluga II. International airport "Kaluga" them. K.E. Tsiolkovsky. From 1892 to 1935, the theoretician of cosmonautics, the outstanding inventor K.E. Tsiolkovsky lived and worked in Kaluga. In 1967, the State Museum of the History of Cosmonautics was opened, the first in the world and the largest in Russia, created with the direct participation of Sergei Korolev, Yuri Gagarin and other cosmonauts of the USSR. On April 17, 2021 the museum complex “The second stage of the FSBUK“ The State Museum of the History of Cosmonautics named after KE Tsiolkovsky "" began receiving visitors.

There are many versions about the origin of the city's name. At the end of the 18th century, Academician VF Zuev, who determined the location of the ancient Kaluga, made the assumption that its name comes from the name near the flowing Kaluzhka River: “He got his name from the Kaluzhka River, where he stood before, that is, at its mouth, where the now manifested image is located. " The same opinion was shared by the Kaluga archaeologist, chairman of the Kaluga Scientific Archival Commission, Ivan Chetyrkin, who believed that the name of the river comes from the Russian words kalyuzha, kalyuzhin, which means "swamp" or "swamp". According to the Explanatory Dictionary of V. Dal, the word kaluga in Tver and Kostroma was called "swamp, swamp, nasolody", in Kaluga and Tula - "peninsula, otok, kalach", and in other regions of Russia - "I will understand, a meadow, dig out, reap ". In the Dictionary of Church Slavonic and Russian, compiled by the Second Branch of the Imperial Academy of Sciences, the word kaluga is explained as “a dirty place, swamp (swamp), bog”; from this word comes kaluga, which means: "stagnant water, mud, mud", kaluzhana, which has the same meaning as "kaluga", and finally, marigold - a marsh grass known under the Latin name "Caltha palustris". M. Vasmer's etymological dictionary also interprets the word kaluga as "swamp, swamp" and finds it