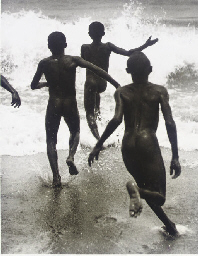 "Liberia", "Liberia, 1930s" (eng. Liberia; Liberia, c. 1930) is a black and white photograph by the Hungarian photographer Martin Munkácsy, created in 1929-1931. Also known as Three Boys at Lake Tanganyika, Boys running into the surf at Lake Tanganyika, Liberia. The photo shows from the back several naked black boys joyfully running one after another during the surf into the water. Three of them are shown in full, and the right arm of the fourth is visible below the elbow on the left side of the image. This edge was cropped more than the right one. At the bottom of the photo from the author's archive, it was written in blue ink - "Sea ...". On the back side of the print, probably by the master's daughter, there is a note "Lake Tanganyika, 1932 // Joan Munkachi". There are several versions regarding the place and time of the creation of the photograph. According to one of them, it is assumed that Munkacsy actually filmed the scene on the East African Lake Tanganyika in the late 1920s and early 1930s during a business trip to Africa on the instructions of the German weekly Berliner Illustrirte Zeitung. According to another, the photo was actually taken in Liberia, where he worked at that time, and thus the boys do not throw themselves into the waters of Lake Tanganyika, but into the Atlantic Ocean. According to photography researcher Michael Freeman, Munkacsy worked in Liberia, and not on the shores of Lake Tanganyika, where there is no such surf at all. In this connection, such names as “Three Boys at Lake Tanganyika” and “Boys Running into the Surf on Lake Tanganyika” he described as “misleading”. Photography had a decisive influence on one of the greatest photographers in history: the "father" of reportage and street photography, the author of the "decisive moment" concept - Henri Cartier-Bresson. “In 1932, I saw a photograph taken by Martin Munkacsy of three black children running to the sea, and, I confess, it became for me the spark from which the flame ignited ... This photograph alone had a huge impact on me. There is so much immediacy in this image, so much joy of life and talent that I still admire him, ”he later recalled. Also, according to