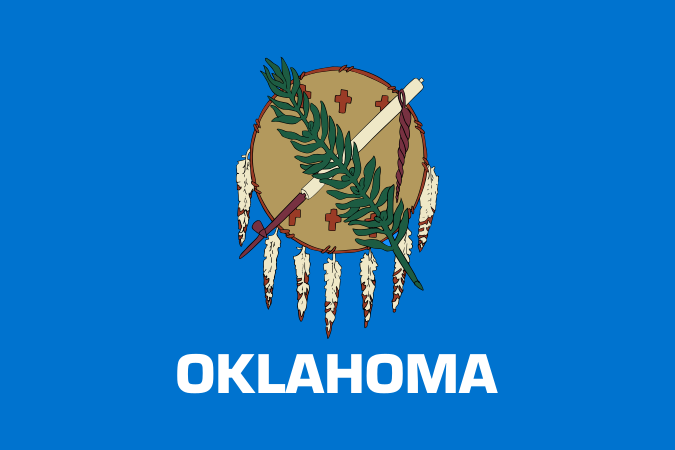 Oklahoma (English Oklahoma, American pronunciation: [ˌoʊkləˈhoʊmə] ( listen); Cherokee ᎣᎦᎳᎰᎹ) is a state in the south-central United States. It borders Texas to the south, Kansas and Colorado to the north, Arkansas and Missouri to the east, and New Mexico to the west. Population 3,963,516 (2020; 28th in the US). The capital and largest city is Oklahoma City. The name "Oklahoma" comes from the words okla humma from the Choctaw Indian language, which means "red people". The official state motto is "Work conquers all." The official nickname is the Agile State.

The name Oklahoma comes from the phrase Okla Humma, translated from the Choctaw language meaning literally "red people" or Indians. The name was proposed by Choctaw chief Allen Wright in 1866 while negotiating a treaty with the federal government on the status of the Indian Territory. As an equivalent of Indian, Okla Humma is used in the Choctaw language to describe Indians in general. The Choctaw Indians were not native to these lands. They were forcibly relocated here among the five civilized tribes. The Indian Territory became de facto known as the Oklahoma Territory, officially the name "Oklahoma" was approved in 1890.

Oklahoma is the 20th largest US state with an area of ​​181,035 km² (69,898 sq mi). The state borders Arkansas and Missouri to the east, Texas to the south, New Mexico to the west, and Colorado and Kansas to the north. Natural features, in particular, sharp temperature changes during the passage of atmospheric fronts, create favorable conditions for the occurrence of strong winds and hurricanes. Devastating tornadoes are not uncommon in this state. A tornado on May 20, 2013 caused great damage to the state.