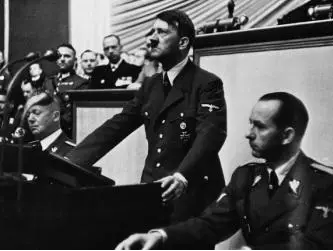 Hitler's Speech September 1, 1939 - Adolf Hitler's speech at the emergency session of the Reichstag at the Kroll Opera. The speech was a public declaration of war on Poland (this was not officially done), and from this date the beginning of the Second World War is calculated. The battleship Schleswig-Holstein was the first to begin hostilities around 4:48 am on September 1. At 5:40 a.m., Hitler addressed the troops with a proclamation: “The Polish state has abandoned the peaceful settlement of the conflict, as I proposed to do, and has taken up arms ... To stop this madness, I have no other choice but to oppose force from now on ". At 11:40 a.m., the German High Command issued a proclamation to the troops (“Soldiers of the German army—after all other means have failed—the decision must be made by arms”). The speech itself in the Reichstag took place somewhat later. While some of the claims were true, overall the speech was a "striking catalog of lies". The course of diplomatic events leading up to the invasion was distorted in detail. As always, I tried peacefully to achieve a revision, a change in this unbearable situation. It's a lie when the world says we want change by force. <...> In the same way, I tried to solve the problem of Danzig, the corridor, etc., by offering a peaceful discussion of the problems. <...> In a conversation with Polish statesmen, I discussed ideas that you are familiar with from my last speech in the Reichstag. <...> There is nothing in the world more modest and loyal than these proposals. <...> These proposals were rejected. Not only was the answer first mobilization, but then the intensification of terror and pressure on our compatriots... <...> Poland was not ready to settle the problem of the Corridor in a reasonable way... <...> I made one more final effort to accept an offer of mediation by the British Government. <...> For two days in a row I sat with my government and waited whether the government of Poland would consider it possible to send a plenipotentiary representative or not. <...> Deputies, if the German Government and its Fuhrer would patiently put up with such treatment of Germany, they would only deserve to disappear from the political