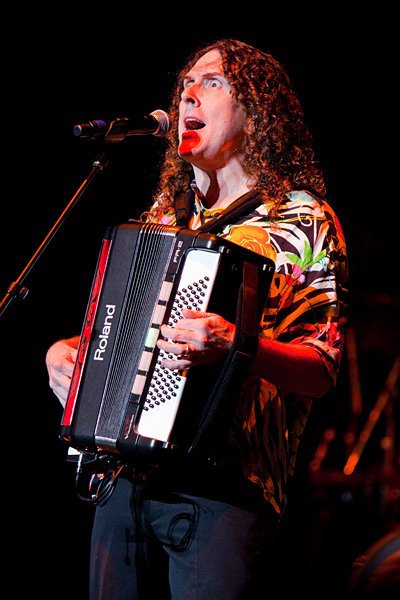 Alfred Matthew Yankovic, better known as Weird Al Yankovic (in English transcription Yankovik, Eng. Alfred Matthew "Weird Al" Yankovic; October 23, 1959, Downey, California) is an American musician known for his parodies of contemporary English-language hits. The lyrics of his songs are based heavily on mocking contemporary popular (American) culture, including TV, movies, food, music, and media news. Although it was parodies that made him famous, Yankovic also recorded many humorous songs with original melody. Some of them are stylizations (parodies of the performance style), when he chooses not a single song for parody, but imitates a peculiar style characteristic of an individual performer or group. Most of his albums include a medley that mixes choruses from various songs, performed in a polka style with accordion accompaniment. One of his most famous parodies is "Fat" ("Fat") - a parody of the Michael Jackson song "Bad" ("Bad").

The only child of Nick Yankovic (June 4, 1917 - April 9, 2004, Serbian American) and Mary Elizabeth (before marriage - Vivalda, February 7, 1923 - April 9, 2004, American with Italian and English roots), Alfred was born in Downey and grew up in Lynnwood , California Born in Kansas City, Kansas, Nick moved to California after serving in World War II. He believed that “the key to success” was “to do things in life that bring you happiness” and often reminded his son of this wisdom. Nick married Mary Vivalda in 1949. Mary, who came to California from Kentucky, gave birth to Alfred 10 years later. On October 22, 1966, the day before his seventh birthday, Al took his first accordion lesson, which would define his career in music. A salesman traveling through Lynnwood offered Yankovic's parents the choice between studying accordion or guitar at a local music school. Yankovic states that the reason his parents chose the accordion over the guitar was because "they thought there should be at least one more Yankovic accordionist in the world", referring to Frankie Yankovic, with whom they are one