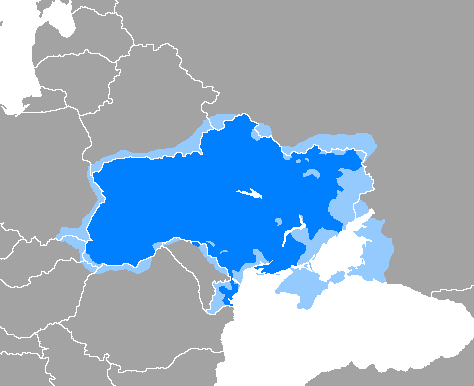 Ukrainian language (Ukrainian language) is one of the Slavic languages, the national language of Ukrainians. It is close to Belarusian and Russian, with which it unites into the East Slavic group of languages. It is distributed mainly on the territory of Ukraine, as well as in Russia, Belarus, Kazakhstan, Poland, Slovakia, Romania, Moldova, Hungary, Serbia and among the descendants of emigrants in Canada, the USA, Argentina, Australia and other countries. It is the state language of Ukraine. In a number of Central and Eastern European states where Ukrainians are usually densely settled (Poland, Slovakia, Serbia, Romania, Croatia and Bosnia and Herzegovina), Ukrainian has the status of a national minority or regional language. The total number of Ukrainian speakers in the world, according to various estimates, ranges from 36 to 45 million people, of which 31,971 thousand Ukrainians (85.2%) and 328 thousand Russians are native Ukrainian in Ukraine (2001). The main phonetic features of the Ukrainian language include the development of *ě in place and the etymological *o, *e of the vowel i, which caused the alternation /o/, /e/ with /i/; hardening of consonants before e; the presence of the fricative /ɦ/. Of the inherent features of Ukrainian morphology, such as the spread of the vocative case; the presence in the forms of the dative and local cases of masculine nouns of the endings -ovі, -еві; distribution of contracted forms of adjectives; the formation of future tense forms of imperfective verbs in a synthetic way. In the field of syntax, impersonal sentences with an invariable verb form into -but, -to, etc. are common. The basis of the vocabulary of the Ukrainian language is the Proto-Slavic lexical fund, the words of Old Russian, as well as proper Ukrainian origin: garniy "beautiful", "good"; mriya "dream"; random "daily", children "act" and many others. Dialects of the Ukrainian language are traditionally grouped into three dialects: southwestern (including Volyn-Podilsky, Galician-Bukovinian and Carpathian dialects), northern and southeastern dialect, which has become the basis of the modern literary language. Like all East Slavic languages, Ukrainian was formed on the basis of Old Russian dialects.