Hooray, ran out of oil! 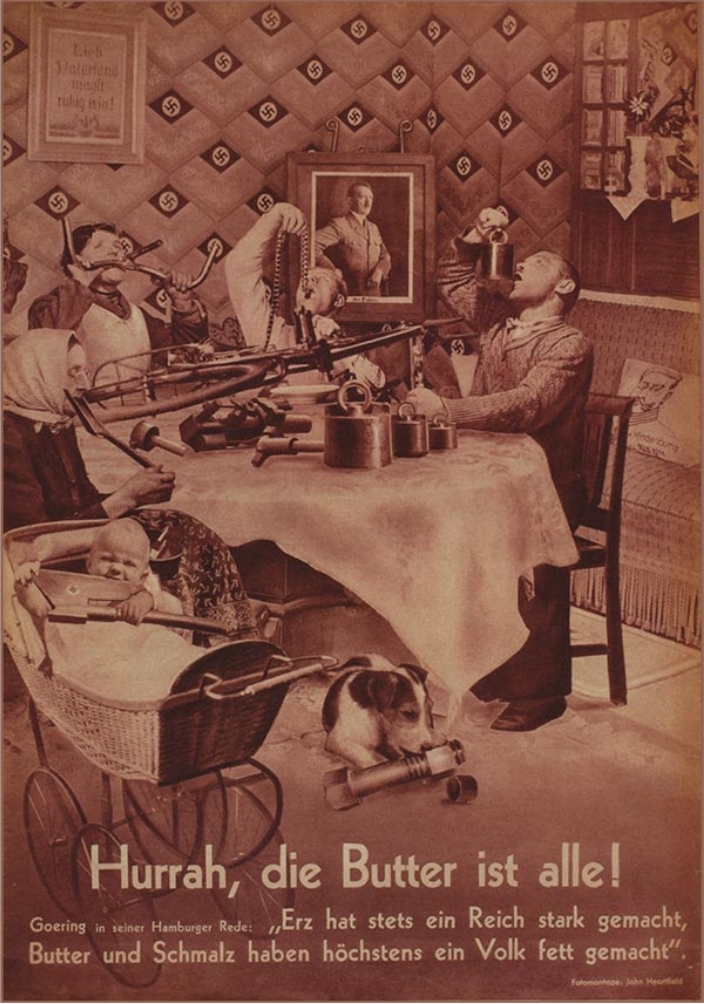 “Hurrah, the oil is over!” (German: Hurrah, die Butter ist alle!) is an anti-militarist satirical photomontage by German artist, photographer, poster artist and decorator John Heartfield, published on December 19, 1935 in the pro-communist magazine AIZ. One of the most famous works of the anti-fascist communist is a satirical reference to a quotation from a speech by Hermann Goering delivered in 1935 in Hamburg. It justified the exorbitant military spending of the Third Reich, which caused a food crisis. At the Hartfield montage, a German family exposed to Nazi propaganda is forced to make do with industrial metal products instead of scarce food.

Hermann Goering, after Adolf Hitler came to power, was engaged in the reconstruction of German military aviation and industry. In January 1933, he became Reich Minister without Portfolio, in charge of aviation and the Prussian Ministry of the Interior. In April 1933, he became head of the newly created Imperial Aviation Ministry, beginning a covert revival of the air force, which Germany was forbidden to have under the terms of the Treaty of Versailles. In March 1935, Hitler officially recognized the existence of an air force in Germany, and Goering was appointed commander in chief on the same day. The militarization of the economy caused problems in the country, which worsened in the spring of 1935. This also affected the food supply, one of the reasons for which was the restriction of food imports, which caused discontent among the population. This was especially acute in Hamburg, where dissatisfaction with the shortage of oil caused protests. Economics Minister Hjalmar Schacht assumed that the crisis would force cuts in aviation funding. In response, Goering went to Hamburg, where he delivered a speech to the NSDAP activists, which became widely known. It contained the following justification for military spending: “There are people in the international arena who are hard of hearing. Only the roar of cannons can make them hear. And it is the guns that we are trying to produce now. We don't have oil, comrades, but I want to ask you: what do you prefer? Oil or guns? Do we need to import fat or iron ore? Here I am to you