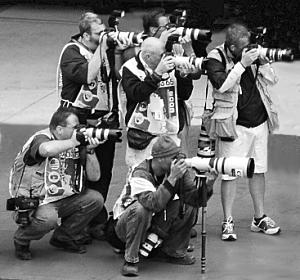 Photojournalism is a specific form of journalism that uses photography as its main medium of expression. Photojournalism differs from related genres of photography (such as documentary photography, street photography, and celebrity photography) in the following ways: Time - snapshots matter in the chronological context of the development of events. Objectivity - the situation assumes that the photographs will be honest and will accurately reproduce the captured events. Narrative - Snapshots, combined with other elements of the news, inform and give the reader or viewer an idea of ​​the essence of events. Photojournalists must act, make decisions and wear photographic equipment in the same conditions as participants in events (fire, war, riots), often being exposed to equal risk with them. Photojournalism, as a descriptive term, often implies a particular style or approach to creating images. Photojournalists' approach to impartial photography is becoming a popular and distinct style of commercial photography. For example, today many wedding photographers shoot impartial chronicles of wedding events in a "reportage" style. If the photographer systematically reflects cultural and social events of cultural and historical significance, this type of photojournalism refers to photo chronicles.

Origin of the term

Prior to 1880, printing equipment could not reproduce photographs correctly. Photographers such as Frank Meadow Sutcliffe successfully imitated a photo essay, although their shots were in fact staged. Usually, an artist made an engraving from a photograph, from which a print was made. The first reportage photographs from the fields of the Crimean War (1853-1856) taken by British reporters such as William Simpson of The Illustrated London News or Ro