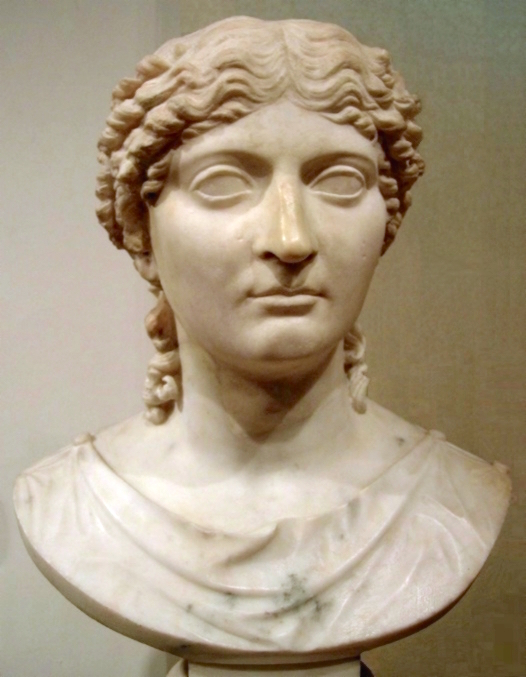 Iulia Agrippina, also known as Agrippina Minor, or Agrippinilla, and after 50 as Iulia Augusta Agrippina; or 6 November 16 - 19/23 March 59), was a Roman empress and one of the most prominent women of the Julius-Claudius dynasty. She was the great-granddaughter of Emperor Augustus, the sister of Emperor Caligula, the nephew and fourth wife of Emperor Claudius, and the mother of Emperor Nero. Agrippina the Younger is described by ancient and modern sources as "ruthless, ambitious, violent and arrogant." Many Roman historians accuse her of poisoning Emperor Claudius, but reports differ.

Agrippina was the first daughter and the fourth child in total of Agrippina the Elder and Germanicus. She had three older brothers, Nero Caesar, Drusus Caesar and the future emperor Caligula, and two younger sisters, Julius Drusilla and Julius Livil. The two eldest brothers and mother fell victim to the intrigues of Praetorian Prefect Lucius Elijah Sejanus. It was named after its mother, Agrippina the Elder, who is remembered as a modest and heroic matron, the daughter of Julia the Elder and the Roman military leader and statesman Mark Vipsania Agrippa. The father of Julia the Elder was Emperor Octavian Augustus himself, and she was his only biological child, descended from Augustus' second marriage to Scribonia, a close relative of Gnaeus Pompey the Great and Lucius Cornelius Sulla. According to her mother's line, Agrippina the Younger was a direct descendant of Augustus. Agrippina the Younger's father was a Germanic, a popular statesman and military leader. His father was the military leader Nero Claudia Drusus, better known as Drusus the Elder, and his mother was Antonio the Younger. Germanicus also had a younger sister, Livila, and a brother, the future Emperor Claudius. Claudius was thus Agrippina's uncle and third husband. Agrippina's grandmother Antonija Mlađa was the daughter of the triumvirate Marko Antonija and Octavia Mlađa, August's sister. Germanicus' father Drusus the Elder was the younger son of Empress Livia and Praetor Tiberius Nero, and thus the younger brother of Emperor Tiberius and the stepson of Emperor Augustus. In the year 9, Augustus ordered Tiberius to adopt Germanicus and appoint him his successor. Germanicus was Augustus' favorite and the old emperor hoped that Germanicus would inherit his stepson and heir Tiberius. Therefore, Tiberius is, in addition