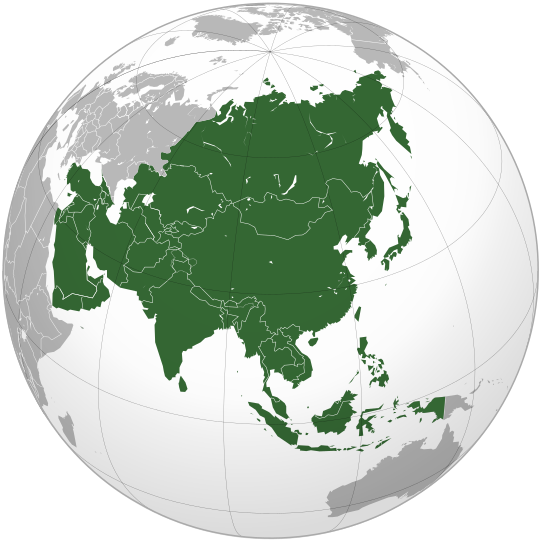 Asia (from the Phoenician and Akkadian words asu meaning "sunrise" - therefore, Asia is the "land of sunrise"), is the largest and most populated continent. It occupies 30% of the Earth's surface, 80% of Eurasia and is almost entirely in the northern and eastern hemispheres, only some Indonesian islands are outside these borders (the archipelagos in the extreme southeast move to the southern hemisphere, and the Chukchi Peninsula to the western hemisphere). It consists of 49 countries and extends to three oceans: the Indian Ocean in the south, the Arctic Ocean in the north and the Pacific Ocean in the east. Asia is, on average, the highest continent in the world (950m). According to geologists, Asia is the oldest continent. The area of ​​this continent is 44.4 million km² (excluding Antarctica). Asia is a continent of superlatives, among other things there are: the most populous country in the world - the People's Republic of China the largest part of the largest country by area - Russia, is located in Asia the highest mountain range - the Himalayas and all known peaks above 8,000 m the deepest and oldest inland lake - Lake Baikal the lowest water surface below sea level - the Dead SeaAsia is a continent with the most diverse vegetation, ranging from the permanently frozen land (permafrost) in Siberia to the jungle in Southeast Asia. In addition to extreme climatic conditions in tundra, deserts and tropical rainforests, there are all other known vegetation zones. Another specificity of Asia is that it contains the largest number of intercontinental countries in the world, whether it is the Asian part of these countries or the territories of Asian countries on other continents. These countries include Russia, Kazakhstan, Indonesia, Japan, Egypt, Greece and Turkey. Asia is a continent full of opposites. Asia has the highest mountains in the world, and the deepest sea valleys stretch along its shores. In Asia, there are areas with strong volcanic activity, but also very quiet areas, the largest plateaus, large lowlands and entire areas without drainage to the sea. And the climate of Asia is very diverse. Most of the world's population lives in Asia, and the national and linguistic composition is more diverse than on any other continent. Asia is characterized by a wealth of ancient cultures, but also great religious, economic and