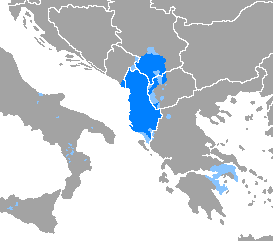 The Albanian language has 7 vowels and 29 consonants. The Gege dialect has nasal vowels that are absent in the Toska dialect. The stress is mostly on the penultimate syllable. Nouns are divided into 3 genders (masculine, feminine and neuter) and 2 numbers (singular and plural). There are 4 declensions and 6 cases (nominative, genitive, dative, accusative, vocative and ablative). The article can be found before or after the noun, as in Romanian, Bulgarian or Macedonian (Bug. planina - planinata, Alb. mal-mali).

This language is spoken by about 6 million people in the Balkans, primarily in Albania, Kosovo, North Macedonia,