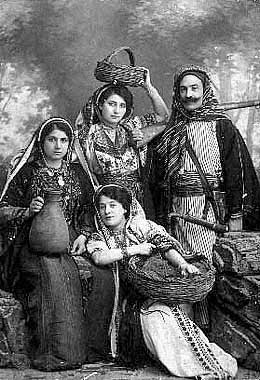 The Arabs (Arabic: العرب [ʻArab]) are a Semitic people who mostly lived in the Middle East and North Africa. There are about 250 million Arabs, and there are three classifications of belonging to the Arab people: by politics, language and origin. Based on these three classifications, the number of Arabs is extensible, because if we go by the number of people whose first language is Arabic - their number is then 180 million. Arabs speak Arabic and use Arabic script.

Semitic people inhabiting the Middle East and North Africa from Morocco to Oman, and from Turkey to Chennai in the south. Geographically, the Arabs cover some 10 million square kilometers and have at least 200,000,000 members. About 4 million Arabs also live in Europe and about 2 million in America. On the Arabian Peninsula, in the area of ​​Hejaz, an Arab state was created in the 5th century, with an economic and religious center in the city of Mecca. The heart of the Arab country is Saudi Arabia and Yemen, an area known as the Hijaz. Around 610, with the birth of Islam, Hijaz became a trading center along caravan routes. Mecca is becoming one of the most important cities. Ethnically, Arabs are mostly dark-haired and brown-eyed, fair-skinned, but it also varies from place to place. They are mostly Sunni Muslims by religion, and only 10% are Shiites (especially in Yemen, parts of Iraq and the Persian Gulf coast). Primarily, the Arabs are, along with the Jews, one of the two peoples to whom Sam gave his origin. Throughout their history, they have founded a number of countries: Algeria, Bahrain, Egypt, Iraq, Jordan, Kuwait, Lebanon, Libya, Morocco, Oman, Qatar, Saudi Arabia, Sudan, Syria, Tunisia, the United Arab Emirates, Yemen, and Palestine that is still fighting for its origin and recognition. Socially, Arabs are divided into permanent residents (rural 'felahin' peasants and urban 'hadar', urban Arabs) and nomadic, we know them as Bedouins. There are several linguistically Semiticized (more precisely Arabized) peoples, but they are not Arabs, and they are ethnically something else, especially there are Arabized Jews in North Africa, Yemen and Iraq. Some Copts are also Arabized, but they are originally Egyptians, a Hamitic people whose ancestors founded the Egyptian culture and state.