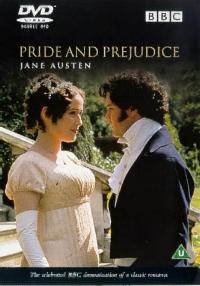 "Pride and Prejudice" is a British television series of six episodes recorded in 1995. In terms of genre, it is a costume drama, an adaptation of Jane Austen's 1813 novel of the same name. The series was directed by Andrew Davis, and stars Jennifer Ellie, who plays Elizabeth Bennett, and Colin Firth, who plays Mr. Darcy. The series, whose executive producer was Su Bertvisel, was realized in cooperation with the British television network BBC and the American television network A&E Network. The series premiered on the BBC's first program from September 24 to October 29, 1995, and each episode lasted 55 minutes. The television network A&E Network, as the exclusive holder of the rights to show the series in the USA, broadcast the series in three terms in which two episodes were shown. The series premiered in the United States from January 14 to 17, 1996. "Pride and Prejudice" has been spatially and temporally located in England since the beginning of the nineteenth century. The story is about the five unmarried daughters of Mr. and Mrs. Bennett after the well-to-do and still unmarried Mr. Bingley, together with his friend, Mr. Darcy, moves into their neighborhood. While Bingley immediately begins to attract the attention of Mr. Bennett's eldest daughter, Jane, Darcy tries with great difficulty to get used to the new life and environment, spending most of her time constantly outwitting Bennett's second-oldest daughter, Elizabeth. The New York Times described the series as "a witty mix of love stories and social intrigue, wisely wrapped in the ambitions and illusions of the provincial upper class." the actress, which was awarded to Jennifer Ili, as well as the Emmy Award for "outstanding individual achievement in costume design for a miniseries or television special". The scene showing Fert in a wet shirt was rated as "one of the most memorable moments in the history of British television". This series inspired the author Helen Fielding to write a series of novels about Bridget Jones. In the movies