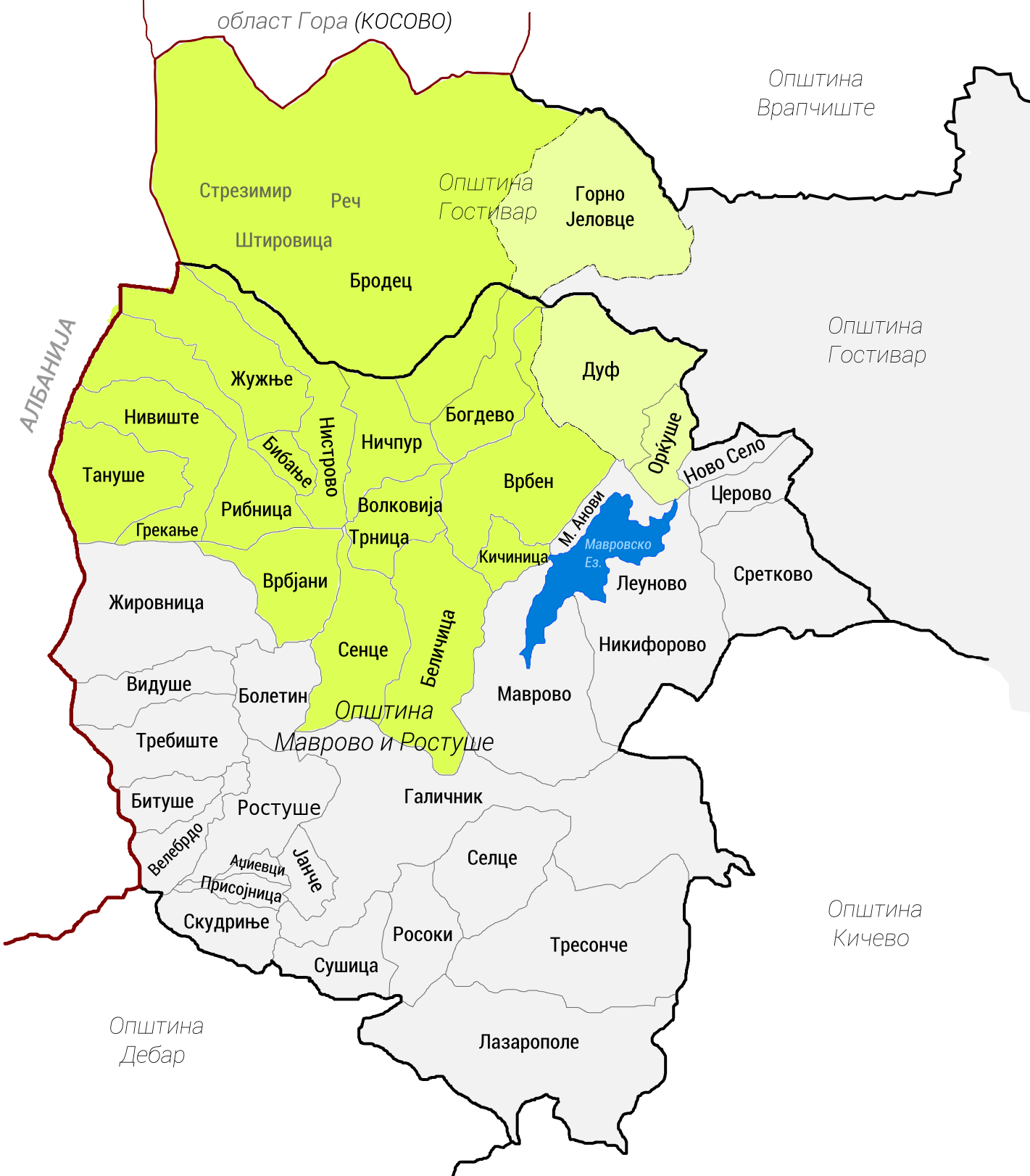 Gornja Reka (Mkd. Gorna Reka; alb. Reka e Epërme) is a geographical and ethnographic subregion of the wider Reka region, in the west of North Macedonia, including settlements in the northwestern part of the municipalities of Mavrovo and Rostuša and the municipality of Gostivar. This region is home to both Muslim and Orthodox Albanian-speaking populations who consider themselves Macedonians, with a few notable exceptions in the past and recent times. Gornja Reka is an alpine mountainous and rugged region with mountain pastures and cattle. In modern times, the largest inhabited place is the village of Vrbjani. This region is an isolated and undeveloped area with limited communication links, where access and travel become difficult during the snowy winter months. Throughout history, the inhabitants of this region were mainly engaged in agriculture, and a part of the population is still engaged in agriculture today. In the past, Gornja Reka went through processes of depopulation due to seasonal and/or permanent migrations in nearby areas, but also abroad in search of work and a better standard of living. During the 14th century, Gornja Reka was part of Dušan's empire, and after its collapse in 1371, it belonged to the state of Serbian King Marko, ruled by the Mrnjavčević family, until 1395, when this territory was conquered by Bayazit I, Sultan of the Ottoman Empire, under whose rule it remained until the Balkan Wars of 1912-1913. years. After that, it became part of the Kingdom of Serbia, the Kingdom of Yugoslavia, the Socialist Federal Republic of Yugoslavia, and finally part of North Macedonia.

The wider Reka region is divided into Mala, Donja and Gornja Reka (or Velika Reka). Gornja Reka, in addition to the Reka region, was also considered (and from the Albanian point of view is still considered) part of the larger Dibra region, which includes several sub-regions around the town of Debra on both sides of the Albanian-North Macedonian border. The Gornja Reka region is bounded by Kosovo in the north and Albania in the west. It is a mountainous area with alpine mountain pastures located in the northern part of the Radika river basin, which continues in Donja Reka south to the Boško bridge, near Mala Reka. The northern and northeastern border of Gornja Reka is the Velika Vraca mountain, which is d�