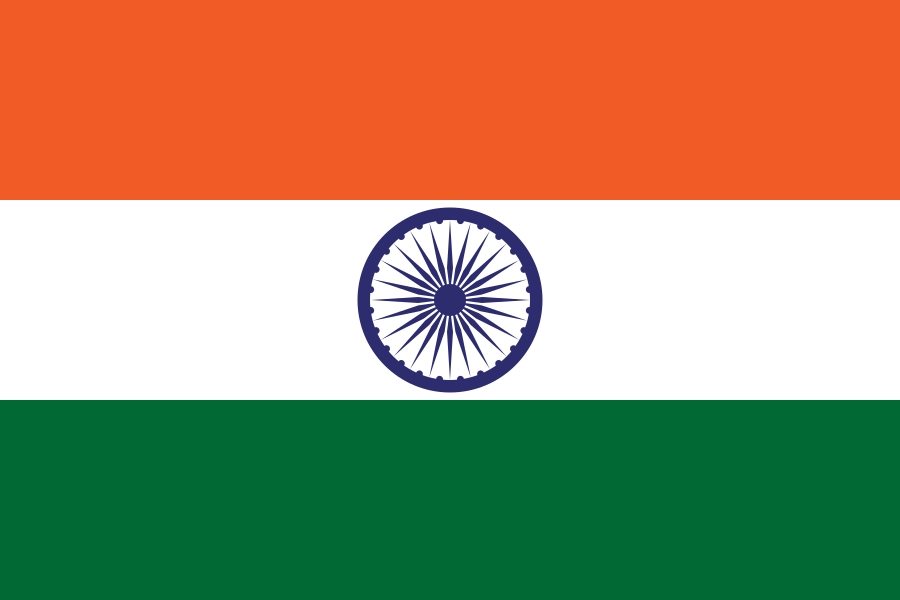 India (Hind. भारत; engl. India), officially the Republic of India (Hind. भारत गणराज्य, transl. Bhārat Gaṇarājya; engl. Republic of India), is a country in South Asia. It is the seventh country in the world in terms of the area of ​​its territory, the second in terms of population, with about 1.2 billion inhabitants, and it represents the most populous democracy in the world. It exits the Indian Ocean to the south, the Arabian Sea to the southwest, and the southeast to the Bay of Bengal. It borders Pakistan to the west, China, Nepal and Bhutan to the northeast, and Bangladesh and Myanmar to the east. Near India, as islands in the Indian Ocean, are Sri Lanka and the Maldives; in addition, the Indian islands of Andamani and Nicobari share a maritime border with Thailand and Indonesia. As home to the Indus Valley Civilization and an area of ​​historical trade routes and vast empires, the Indian subcontinent has been known for its economic and cultural wealth for much of its long history. Four important religions - Hinduism, Buddhism, Jainism and Sikhism - originated in India, while Zoroastrianism and the Abrahamic religions (Judaism, Christianity and Islam) arrived in the 1st millennium AD. e. and significantly shaped the diverse culture of the area. The British East India Company gradually took over power in India from the early 18th century, until the middle of the 19th century India became a colony of the United Kingdom. After the struggle for independence marked by widespread non-violent resistance led by Mahatma Gandhi, India became an independent state in 1947. When India gained independence in 1947, Indian politics was very turbulent, especially the two-term Indian Prime Minister. Indira Gandhi, who was killed in 1984. The capital is New Delhi, and the financial, cultural and economic center is Mumbai or Bombay. The official languages ​​with the most speakers are Hindi, Bengali, Tamil, Telugu, Marathi and Urdu, which is spoken by one billion people in India. India is known in the world for its food, curry and Bollywood movies. India is a republic with a parliamentary system of democracy and consists of 28 states and 7 federal territories. India's economy is the sixth largest in the world in terms of nominal value of GDP and the third largest in terms of money