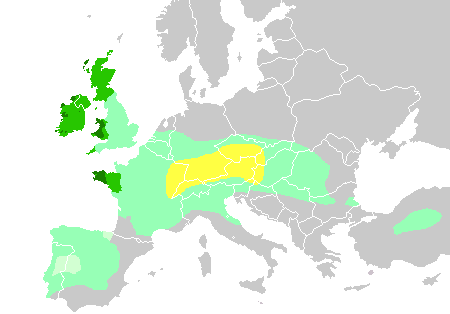 The Celts are an Indo-European people who in the Stone Age mostly settled between present-day France and the Czech Republic (there were also some in the Balkans) in northern Serbia and Slavonia. The Celtic tribe Scordisci founded a city on the site of today's Belgrade, which they called Singidunum or Singidunos, which in translation most probably means the city of Singa, since dun in Celtic means city, fortress. Under German pressure, they were forced to move west and south (Britain, northern Spain, northern Italy, western France). At first glance, it seems strange that the Celts were constantly at war with each other and could never unite. However, they must take into account that they were probably not even aware of the concept of the Celtic nation. The Celts lived in small rural communities. They preferred cattle breeding to agriculture. They were very brave in the fight, but they did not know how to fight according to the instructions. When the battle began every Celt would fight for himself. Celtic civilization has survived to this day in Ireland, Scotland, Brittany, Wales, partly in Cornwall and the Isle of Man. In classical antiquity, the Romans had their first contacts and conflicts with the Celts during the republic, already in northern Italy, where the Celtic Gauls settled north of the river Po in the 6th and 5th centuries. Then the Romans in the further conquest of present-day France clashed with the majority of the Celts in Gaul under their strongest general Vercingetorix, and about these Gallic wars all the way to Caesar there are a number of Roman records with the most details about the Celts, among which the most famous and extensive Latin text De bello Gallico in multiple volumes. Somewhere around 600. p. n. e. tribes that used iron led by wealthy leaders from Gaul (France) spread to Central Europe. They spoke the Celtic language, an ancestor or ancient cousin of the Irish language as we know it today. It was a group of different peoples connected by a common language and a similar appearance, way of dressing and living, which the Greeks knew as the Celts, or Celts. For a long time, they dominated Central and Western Europe, and they also attacked Greece and Rome. They spread in the southwest to Spain and Portugal, in the east to Ukraine and Asia Minor, and in the north to Great Britain and Ireland. Records of the Celts can be found thanks to ancient Roman and Greek documents