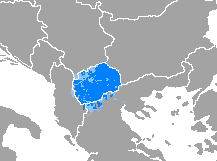 Macedonian Cyrillic is the official script of North Macedonia. It consists of 31 letters. The Macedonian alphabet is based on the Serbian alphabet of Vuk Karadžić, and it was compiled by Krste Petkov Misirkov.