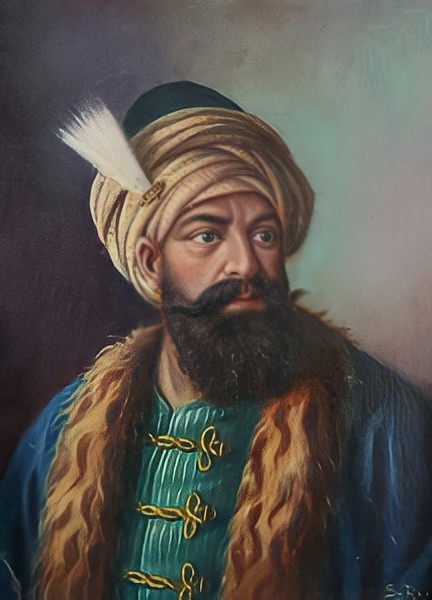 Mahmud Pasha Bušatlija was an Ottoman pasha who was not much respected by the Ottomans. However, in the campaign against Montenegro, he led the army and on several occasions inflicted severe consequences on Montenegro. In the war against Bishop Peter I, Bušatlija claimed to be a descendant of Stanko Crnojević. Bušatlija managed to penetrate into Cetinje in 1785 and burn down the Cetinje monastery. To that, St. bishop Petar I Petrović Njegoš made an alliance with Austria and Russia against the Turks. According to the historian Andrija Luburić, Bušatlija was beheaded (Battle of Krus) by Bogdan Vukov Nikolić from the village of Zalazi near Njeguš. Tomo Oraovac wrote that the knight of the knights was Vukić Popov Petrović from Kuč, killed by Petrović, and because his grandfather was Krusima killed Mahmud Pasha Bušatlija for other merits, and this caused Petrović's envy towards more respectable people. Pavle Rovinski cites the fact that Petar I Petrović believed, along with the rest of the people, that Pasha Bušatli was the mastermind. After he was executed in the battle of Krusi in 1796. year, Peter the First mourned him as a great loss for the whole region. The people interpreted this to mean that he was a ghost and that his soul left his body and flew to fight with those same souls on the other side of the Adriatic Sea. That is how he protected the whole region (Montenegro and Albania) from bad weather: drought, hail, etc. The people stated that since his death there were no more birthdays like before, neither in Albania nor in Montenegro. Glas Crnogorac also published Rovinski's text about Zduhaci. The words of Peter the First about the death of Bušatlija are quoted there: We killed him, but for the happiness of the country it would have been better if he had stayed alive, because his mother carried him under her belt for three years, and he was the strongest bully, who could not be overcome by all overseas... Today, the skull is kept in the Cetinje Monastery. During the scientific meeting about the Crnojevics, Metropolitan Amfilohije of Montenegro and the Littoral showed the skull of Bušatlija to the public. Bušatlije bear the surname after the village they come from, Bušata.