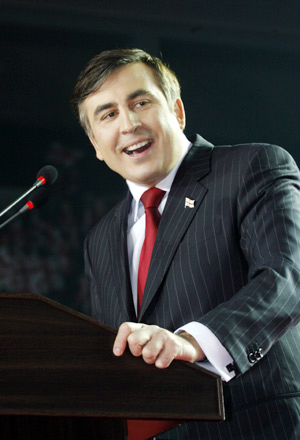 Mikheil Nikolozis dze Saakashvili (Georgian: მიხეილ ნიკოლოზის ძე სააკაშვილი) is a Georgian politician and former president of Georgia. He was the leader of the demonstrations in the Georgian parliament, caused by dissatisfaction with the work of the then president Eduard Shevardnadze, which led to his resignation. After that, Saakashvili won the presidential elections in which Shevardnadze himself voted for him. He was elected to the same position for the second time on January 20, 2008. He was president until 2013, and he continued his political career in 2015 in Ukraine, where he was first an adviser to President Petro Poroshenko, and since May he has been at the head of the Odessa region.

On July 28, 2014, the State Prosecutor's Office of Georgia accused Saakashvili of excessive and unauthorized use of force during the 2007 demonstrations. On August 2, 2014, a court in Tbilisi issued a warrant for his arrest. Saakashvili had previously fled to the United States.

Participation in the Ukrainian Revolution 2014.

Saakashvili also supported the Euromaidan movement during the overthrow of the Ukrainian government and President Viktor Yanukovych. During the riots in Kiev, he also appeared as an official speaker on the stage on Independence Square. During the war in eastern Ukraine, newly elected President Petro Poroshenko appointed him as his adviser. The Georgian government reacted to that act, inviting the Ukrainian ambassador to Tbilisi for talks. On February 17, 2015, the Supreme Prosecutor of Georgia requested his extradition from the Ukrainian authorities.

In mid-September 2008, Russian President Dmitry Medvedev accused Mikheil Saakashvili of being an unpredictable pathologically and mentally unstable drug addict, and of no longer considering him president of Georgia, but a "political corpse."