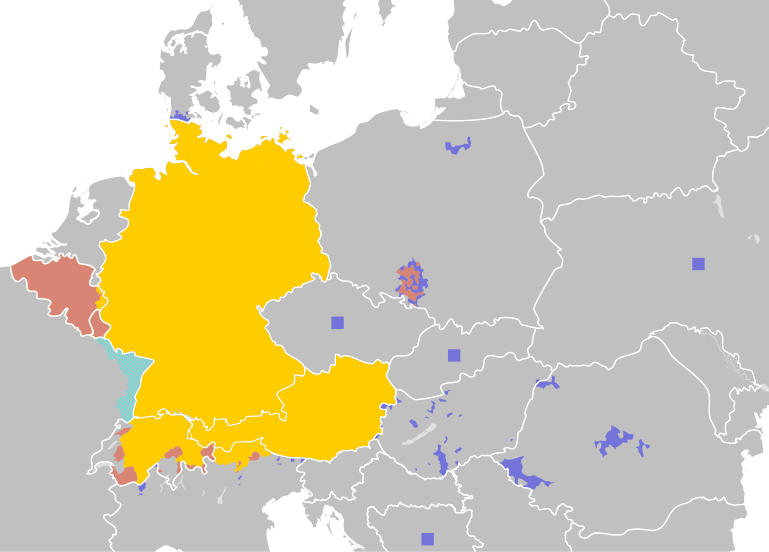 German (deutsche Sprache) is one of the languages ​​of the western group of Germanic languages ​​and is one of the world's largest languages. It is the mother tongue of the largest population of the European Union. German is spoken in Germany, Austria, Liechtenstein, two-thirds of Switzerland, two-thirds of the province of South Tyrol in Italy, the eastern cantons of Belgium and the border areas of Denmark. In Luxembourg, as well as in the French districts of Alsace and Lorraine, the natives of these districts speak different German dialects, while part of the population has mastered standard German (especially in Luxembourg), although in Alsace and Lorraine, French has supplanted German for the last forty years. Small German-speaking communities have survived in Romania, the Czech Republic, Hungary, especially Russia, Kazakhstan, and Poland, although mass emigration of Germans from these countries to Germany has reduced the number of speakers in these communities. Outside of Europe, the largest German-speaking communities are in the United States (North and South Dakota, Montana, Wisconsin and Indiana; in Brazil (Rio Grande do Sul, where the German Riograndenser Hunsrückisch originated, St. Catherine, Parana and Espirito Santo), to which millions of Germans have migrated in the last two hundred years, but most of their descendants do not speak German. German-speaking communities can also be found in the former German colony of Namibia, as well as other countries to which Germans have emigrated, such as Canada, Iceland, Argentina, Mexico, Paraguay, Chile, Peru, Venezuela, Thailand and Australia. German is the mother tongue of about one hundred million people in Europe (2004 data), or 13.3% of Europeans, which makes it the most widely spoken language in Europe without Russia, more than French (66.5 million). speakers 2004) and English (64.2 million speakers 2004). German is the third largest language in schools, the second largest in Europe, and the third largest in the United States (after Spanish and French). German is one of the official languages ​​of the European Union, where it is the third most widely spoken language (immediately after French). The standard German language did not originate from a dialect, but was conceived by a poet