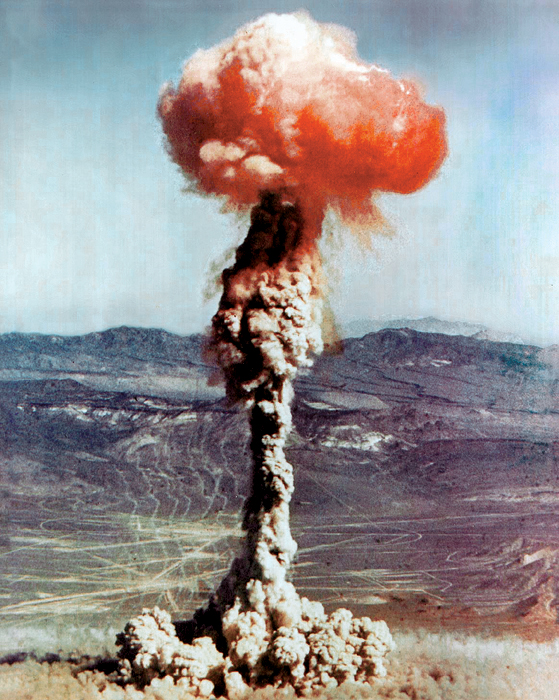 Nuclear weapons are weapons of great destructive power, significantly stronger than even the most powerful conventional explosives. Such a weapon is capable of destroying or seriously damaging an entire city, and would also kill or injure most of the population, while the radiation would be there for decades. The surviving population that remained in those cities would be irradiated and condemned to slowly die out in terrible agony. So, nuclear weapons greatly exceed in their characteristics all known weapons that have been produced to date. In the history of warfare, nuclear weapons have only been used twice, both times during the final days of World War II. The first event occurred on the morning of August 6, 1945, when the US dropped an atomic bomb on the Japanese city of Hiroshima, codenamed Malisha. This bomb was made on the basis of the nuclear fission reaction of uranium 235. Fission means the splitting of the nuclear nucleus. The second event took place three days later when it was dropped on the Japanese city of Nagasaki, which had the code name Debeljko. This bomb was made of plutonium 239. Fusion means the fusion of nuclear nuclei. Because it was constructed differently from the uranium bomb dropped on Hiroshima, the power of its explosion was 1.5 times greater. It is assumed that 129,000 people died in those attacks, and that twice as many died from the direct consequences: radiation, hunger, burns, etc. Seventy years after the attack, people are still dying from the effects of the atomic bombs, as survivors have an above-average number of cancer and high blood pressure.

The possibility of obtaining huge amounts of energy by splitting atoms has been speculated for decades, thanks to discoveries in the field of physics, but no serious research has been started. It all started in 1896, when Henri Becquerel discovered the radioactivity of uranium. The next step was taken by Marie and Pierre Curie in 1902, when they isolated a radioactive element called radium. Three years later, Albert Einstein published his theory of relativity. According to his theory, if we could transform mass into energy, we would get large amounts of released energy. The next big step was taken by Ernest Rutherford and N