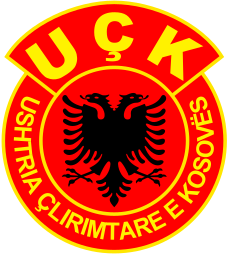 The Kosovo Liberation Army (KLA; Albanian: Ushtria Çlirimtare e Kosovës), known by its acronym UCK (Albanian: UÇK), was an Albanian terrorist paramilitary organization engaged in armed attacks on official state bodies (army, police and others) and civilians. of all nationalities, fought for the secession of the autonomous province of Kosovo and Metohija from Serbia and FR Yugoslavia, and the creation of a Greater Albania. Many domestic and foreign analysts consider it a terrorist organization because of its methods of action, but there are also those who call it a guerrilla. According to the findings of the state bodies of the Republic of Serbia, but also of the Western intelligence services, the basic type of KLA financing was drug trafficking, which accounted for at least half of its funds, while a good part of other funds was collected through criminal activities. The KLA was founded in 1994, and first came out in 1996. Its goal was an independent Kosovo, and it used all means of armed struggle. Parts of the KLA also advocated the goal of annexing all Albanian-populated areas of Serbia, Macedonia, Montenegro and Greece to the state of Albania, and thus the creation of a Greater Albania. The founder and leader of the terrorist KLA until his death in 1998 was Adem Jashari (Albanian: Adem Jashari), who founded the most organized terrorist group Jashari in the early 1990s, and after the destruction of the group took the most important place Hashim Thaçi 1999 The organization participated in conflicts and attacks on Serb civilians in Kosovo and Metohija before and after the arrival of NATO in 1999. And later in other parts of Serbia, such as Presevo, Medvedja, Bujanovac, parts of Macedonia, Tetovo, etc. Many crimes and abuses have been linked to the KLA, such as massacres of civilians, organ trafficking, the establishment of camps and the destruction of cultural and religious monuments. organ trafficking. In April 2014, the Assembly of the Republic of Kosovo voted to establish a special court with international judges to determine crimes against humanity, war crimes and other crimes committed between 1998 and 2000. The KLA did not win a single battle during the war .

In February 1982, Albanians in Germany, originally from Kosovo, founded the organization Kosovo