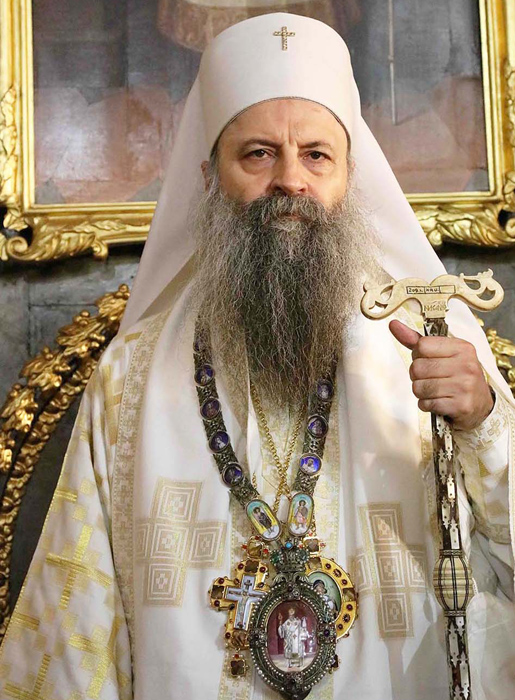 Serbian Patriarch Porphyry (secular name Prvoslav Perić; Bečej, July 22, 1961) is the supreme head of the Serbian Orthodox Church (SOC), the 46th Serbian patriarch. He is a former metropolitan of Zagreb-Ljubljana and vicar bishop of Jegar (1999-2014). He was proclaimed patriarch of the Serbian Orthodox Church on February 18, 2021. His full name and title reads: His Holiness the Archbishop of Peja, Metropolitan of Belgrade and Karlovac and Serbian Patriarch Mr. Porphyry. The Patriarch of Porphyry became recognizable for his communication skills and public speaking related to popular culture. After the liturgy of reconciliation with the Macedonian Orthodox Church - Ohrid Archbishopric (MOC-OA), in May 2022, Porphyry announced that the SOC recognizes the autocephaly of the MOC-OA.

He was born in Becej to father Radivoje and mother Radojka, his secular name was Prvoslav. After the Second World War, his parents moved to Vojvodina from the village of Crnča, near Derventa. He grew up in Curug, where he finished elementary school and high school in Novi Sad. In 1986, he graduated from the Orthodox Theological Faculty in Belgrade. Before that, he was ordained a monk in the Decani Monastery (1985). After graduating from college, he went to postgraduate studies in Athens, where he remained until 1990. With the blessing of the Bishop of Bačka Irinej, on October 6, 1990, he went to the Kovilj monastery. There, on November 21, 1990, he was ordained a hieromonk. At its regular session on May 14, 1999, the Holy Synod of Bishops of the Serbian Orthodox Church elected him Vicar Bishop of Jegar at the Diocese of Bačka. He defended his doctoral dissertation "The Possibility of Knowing God in the Apostle Paul According to the Interpretation of St. John Chrysostom" at the Faculty of Theology, University of Athens (2004). The Council of the Republic Broadcasting Agency (RBA) elected him president on July 29, 2008. In the period 2010-2011. he was the bishop of the military, and then the coordinator for cooperation between the Serbian Orthodox Church and the Serbian Army. At its regular May session on May 24, 2014, the Holy Synod of Bishops of the Serbian Orthodox Church elected him Metropolitan of Zagreb and Ljubljana. On February 18, 2021, he was elected Serbian patriarch by the eparch. He was awarded the Order of St. Ignatius in Sweden in February 2016