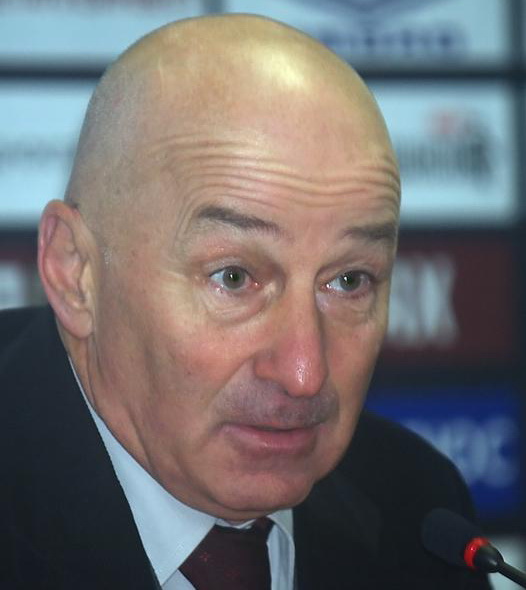 Slavoljub Muslin (born June 15, 1953 in Belgrade, Serbia, Federal People's Republic of Yugoslavia) is a Serbian football coach and former player. He started his coaching career in 1989 and led clubs from France, Morocco, Serbia and Montenegro, Bulgaria, Ukraine, Belgium and Russia. He is a former selector of the Serbian national football team. In addition, Muslin was a famous player. He played as a defensive player for several clubs, among the most famous being the Red Star and later Lille.

Son of Duje Muslin from Split and mother Danica from Kragujevac, Slavoljub Muslin was born in Belgrade where he played for OFK Belgrade, then BASK, and Rad before signing for Crvena zvezda. Muslin was the mainstay of Zvezda's defense during the 70's. During the 6 years spent at Marakana, he played with the biggest stars of the club, such as Dragan Dzajic, Vladislav Bogicevic, Jovan Acimovic, Vladimir Petrovic, Dusan Savic, among others. He won three titles with the Red Star and was a UEFA Cup finalist in the 1978/79 season. losing in the final to Borussia Monchengladbach. In 1981, he moved to Lille, then played for Brest, to end his playing career in Caen.

Muslin began his coaching career at the club where he ended his playing career, in Brest, where he remained until 1991.

Muslin spent three seasons in Po before moving to Bordeaux in 1995. With a team that had great potential and players such as Bixente Lizarazu, Christopher Dugari and future world football star Zinedine Zidane, Muslin achieved good results in the UEFA Cup of the 1995/96 season. securing a place in the 1/4 finals. However, he was fired in the spring of 1996 due to poor results in the championship, which means that he did not lead the team in the 1/4 finals, where the Girondins lost to the favorite Milan.

His former club, Red Star, invited him in the summer of 1999. Muslin took over the team on September 20, which was in a difficult situation after the dismissal of Miloljub Ostojic due to