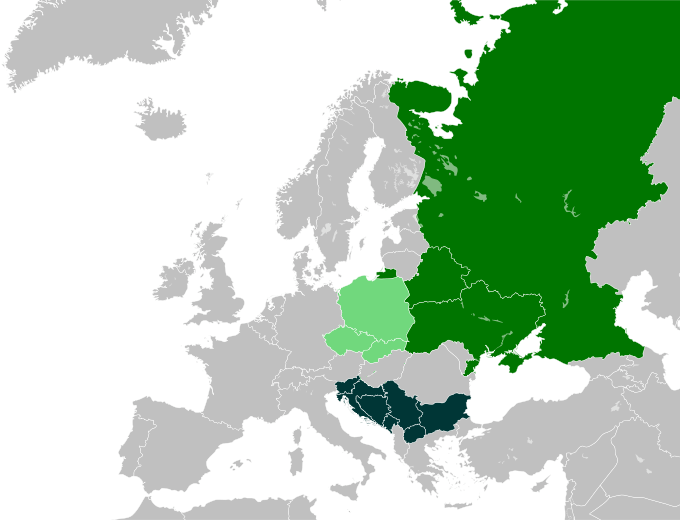 Slavs are the most numerous ethno-linguistic group in Europe. They inhabit Eastern, Southeastern and Central Europe and Northern and Central Asia. Slavs speak Slavic languages ​​that belong to the Indo-European family of languages ​​and share, to varying degrees, certain cultural characteristics. Since the beginning of the 6th century, the areas of Eastern and Central Europe and Southeastern Europe have been expanding and settling. Eastern Slavs inhabited Siberia and Central Asia. Currently, half of the territory of Europe is inhabited by the Slavic-speaking community, while every Slavic nation has emigrants on other continents. Today's Slavic peoples are divided into Western Slavs (primarily Poles, Slovaks and Czechs), Eastern Slavs (Belarusians, Ruthenians, Russians and Ukrainians) and Southern Slavs (primarily Bosniaks, Bulgarians, Macedonians, Slovenes, Serbs, Croats and Montenegrins). Modern Slavs are much more genetically and culturally diverse, and relations between them - even within certain ethnic groups - are diverse, ranging from a sense of connection to a shared sense of hostility.

The Slavic autonomy was reconstructed in the Proto-Slavic language as * Slověninъ (plural * Slověne). The oldest written document in Old Slavonic from the 9th century uses the term Slavs for Slavs. Other early Slavic languages ​​confirm this, including the Old Russian word Slovѣnѣ for "one East Slavic group near Novgorod". However, the earliest written traces of Slavs under this name are found in other languages. In the 6th century Procopius, writing in medieval Greek, used the following names for Slavs Σκλάβοι, Σκλαβηνοί, Σκλαυηνοί, Σθλαβηνοί and Σκλαβῖνοι, while his contemporary Jordanes used the Latin word Sclaveni in Latin. denoting "people who speak (same language)", i.e. people who understand each other, unlike the Slavic word for "foreign people" - * Germans. The word * letter and related words * slava and * slukh originate from the pre-Indo-European word * ḱlew-, a cognate of the ancient Greek word κλῆς, from which the name Pericles is derived, and the Latin clueo.