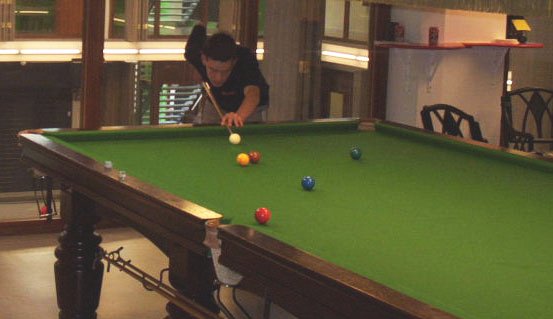 Snooker is a billiards game, most popular in the United Kingdom, Australia and parts of Asia. It is played on a table measuring 12 by 6 feet (approximately 366 cm by 183 cm). The table has six holes - one on each corner and two more in the middle of the long sides. It is played with a billiard cue ball, one white (so-called strike ball), 15 red and six colorful (yellow, green, brown, blue, pink and black) balls, which are also called target balls. Each red ball is worth one point, and the value of the colored ones is (in order): yellow two points, green three, brown four, blue five, pink six and black seven. The player (or team) who scores the most points in one segment of the game (match), and which is called the frame (frame round, round), wins that frame. The player who wins a predetermined number of frames wins the game. Most amateur matches are played on a small number of frames, while professionals play up to dozens of frames in the strongest tournaments. The World Cup final consists of a maximum of 35 frames (best of 35), which means that the winner is the player who first wins 18 frames. This and similar matches are played over two days, in a maximum of four sessions. Snooker, which is generally believed to have been invented by British officers in India, is popular in many English-speaking and Commonwealth countries, and the best professional players earn multi-million dollars (in pounds) during their careers. It is also popular in China and that popularity is growing.

It is generally accepted that snooker originated in the second half of the 19th century. Billiards was especially popular among British officers in India, so little by little, new variants of the traditional game were developed. In one of them, which was invented in the officer's canteen in Jabalpur in 1874 or 1875, the so-called red balls (and black) were added to the already existing ones. colored. The word snooker also has military origins: in military slang it was used to denote first-year cadets or inexperienced personnel. One version claims that Colonel Sir Neville Chamberlain of the Devonshire Regiment once played this new game and when his opponent failed to throw a single ball, he called him a snooker ("lizard") in our military jargon; snooker knows