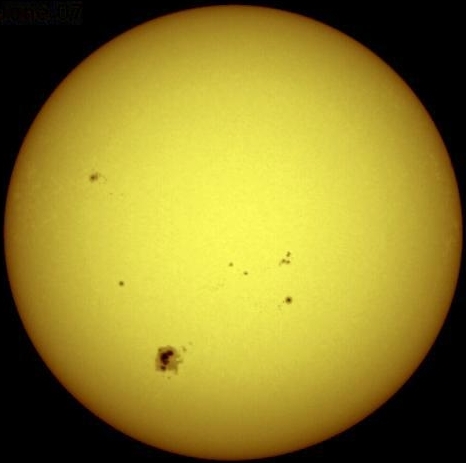 The sun () is closest to us and the best studied of all the stars. It is surrounded by 8 planets and their satellites, 5 dwarf planets, asteroids, comets, meteors and cosmic dust particles, so that the Sun is the central star of the solar system. Solar energy in the form of sunlight and heat enables life on Earth through the process of photosynthesis and affects the climate and weather on Earth. The average distance between the Sun and the Earth is 149,600,000 km or one astronomical unit, which transmits light in 8 minutes and 18 seconds. The sun is an almost perfect sphere (the difference between the equator and the pole is only 10 km) and consists of gaseous hot plasma. It has a strong magnetic field. The diameter of the Sun is about 1,392,000 km, which is 109 times larger than the Earth and weighs about 2 × 1,030 kilograms, and is 330,000 heavier than the Earth, and it makes up 99.86% of the mass of the entire solar system. The Sun consists of hydrogen ( about 74% by weight or 92% by volume), helium (about 24% by weight and 7% by volume) and small amounts of other elements, including iron, nickel, oxygen, silicon, sulfur, magnesium, carbon, neon, calcium and chromium. The sun belongs to the spectral class G2V. G2 indicates that the surface temperature is approximately 5,500 ° C (5,780 K), which gives it a white color, although the Sun appears yellow due to atmospheric scattering, which removes waves of shorter wavelengths (blue and purple light) and leaves a spectrum of frequencies that the human eye perceived as yellow. This scattering gives the surrounding sky its blue color. When the Sun is low in the sky, even more light is scattered, so the Sun appears orange or red. The solar spectrum contains lines of ionized and neutral metals, as well as very weak hydrogen lines. The letter V (Roman numeral 5) in the spectral class designation shows that the Sun is the star of the main series. This means that it generates its energy by nuclear fusion of hydrogen nuclei into helium. The sun was once considered a small and insignificant star, but today it is known to be brighter than 85% of the stars in the Milky Way galaxy, most of which are red dwarfs. The absolute magnitude is +4.83, but since the Sun is much closer to us than other stars, we see it as the brightest celestial body with an apparent magnitude of -26.74. The outer part of the solar atmosphere, called the corona, constantly releases part of the plasma into space in the form of the solar wind,