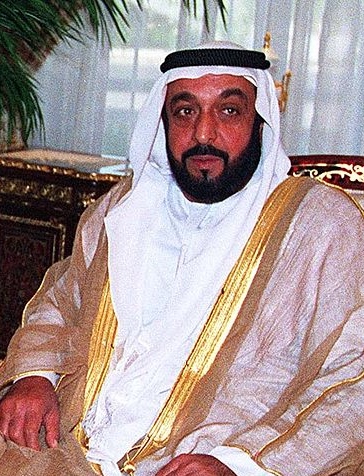 Caliph ibn Zayed ibn Sultan al-Nahyan (ar. خليفة بن زايد بن سلطان آل نهيان; known as Sheikh Khalifa; Al Ain, January 25, 1948 - Abu Dhabi, May 13, 2022) was President of the United Arab Emirates, Emir of the Arab Emirates and Commander of the United Defense Forces. He was also an eminent philanthropist, and spent over 460 million US dollars from his personal funds on humanitarian projects. He reached the position of Emir of Abu Dhabi after the death of his father Zayed ibn Sultan al-Nahyan, thus becoming president of the Federation the next day. Although he held the title of heir to the throne, he has been actively playing the role of president since the late 1990s, because his father was ill. The caliph is also the chairman of the Abu Dhabi Investment Fund, which has over 600 billion US dollars in revenues. The total wealth of the el Nahyan family is estimated at 150 billion US dollars.

The Caliph is the eldest son of Sheikh Zayed ibn Sultan al-Nahyan and Sheikh Hase bint Muhammad ibn Khalifa al-Nahyan, born in Abu Dhabi (then the Peacekeeping States), on January 25, 1948. He graduated from the Royal Military Academy in Sandhurst, United Kingdom.

The caliph was elected the ruler's representative in the eastern region of Abu Dhabi (mayor) and the head of the Ministry of Justice in Al Ain in 1966, when his father, Zayed ibn Sultan al-Nahyan, became the new ruler of Abu Dhabi. Zayed was the ruler's representative in the eastern region. After a few months, that position was taken by Tahnun ibn Muhammad al-Nahyan. with the Abu Dhabi Defense Forces (ADDF), which later became the core of the United Arab Emirates Armed Forces after 1971. Sheikh Khalifa has two sons, Muhammad al-Nahyan and Sultan al-Nahyan.