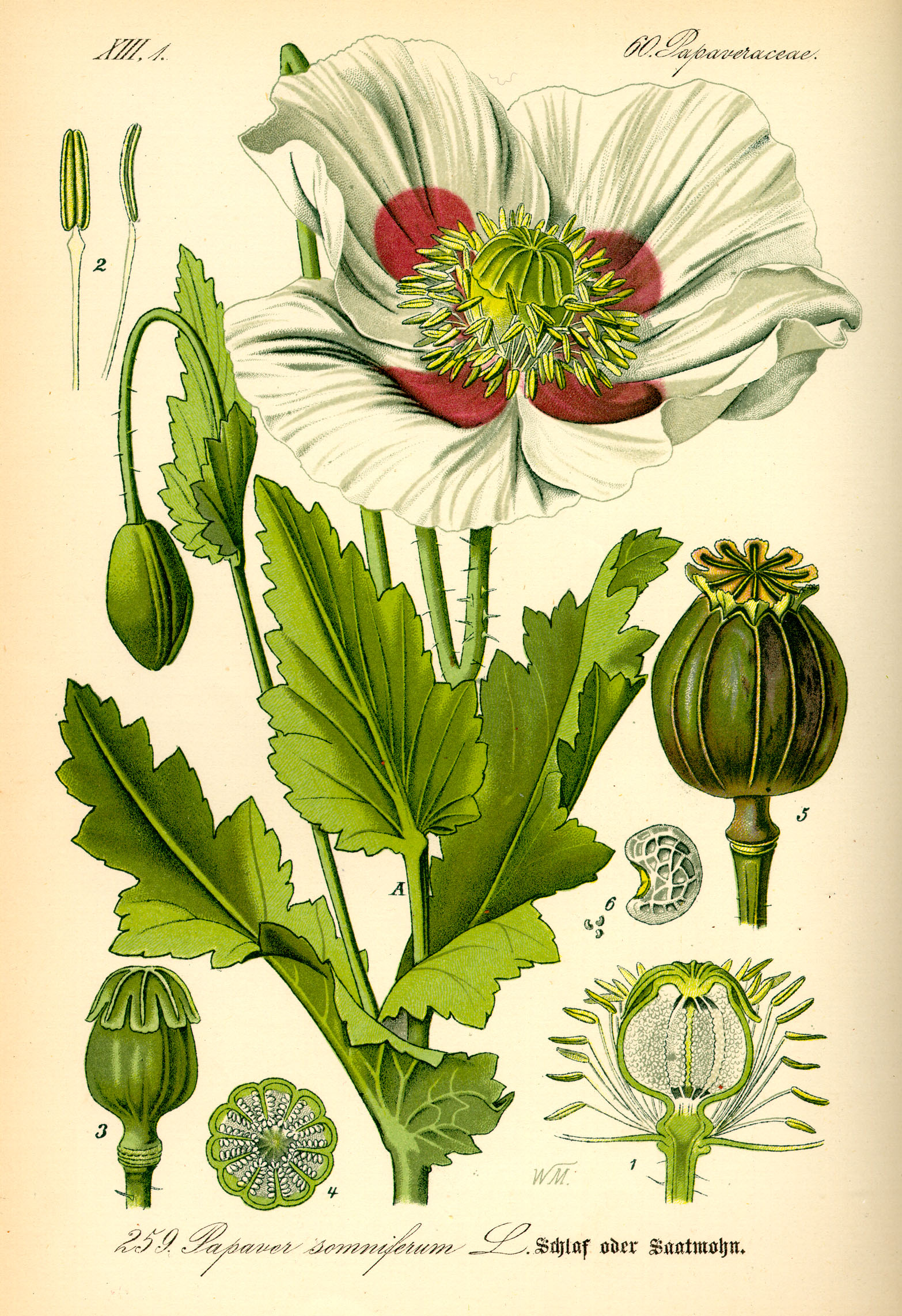 Poppy (opium poppy, opium cocoon; lat. Papaver somniferum) is any of a number of conspicuous flowers, typically one per stalk, belonging to the poppy family. They include a number of species of alluring wildflowers found to grow singly or in larger groups; many species also grow in gardens. Those that grow in gardens include large plants used in mixed grasslands and small plants grown in rocky or mountain gardens. Poppy flower colors include: white, pink, orange, red and blue; some have dark markings in the middle. Varieties that have been cultivated for years also include many other colors ranging from monochromatic dark varieties to gentle pastel shades. The center of the flower has winding anthers surrounded by a round or goblet cluster of four to six petals. Before flowering, the petals are crumpled into a bud, and as the flowering stops, the petals often lie flat before they fall off. The pollen of the oriental poppy (lat. Papaver orientale) is dark blue. Field poppy pollen (lat. Papaver rhoeas) is from dark blue to gray. Bees use poppy as a source of pollen.

Poppy has long been used as a symbol of sleep and death: sleep because of the opium extracted from it, and death because of their blood-red color. In Greco-Roman myths, poppy was used as a gift to the dead. The poppy was used as an emblem on tombstones to mark an eternal dream. This view was used in The Wizard of Oz to conjure up magical poppy fields, dangerous because they caused anyone who crossed them to sleep forever. Another meaning and use of poppies in Greco-Roman myths is the symbol of bright crimson color which signifies the promise of resurrection after death. The flower of the poppy that is worn by many English-speaking countries as a memory of fallen soldiers in the First World War is the bulka (wild poppy) lat. Papaver rhoeas. Bulka is a common weed in many parts of Europe, including Flanders, where some of the bloodiest battles in the First World War were fought. A Canadian military surgeon, John McCree, wrote the song "In the Fields of Flanders" on May 3, 1915, after witnessing the death of a friend, Lieutenant Alexis Helmer. The introductory verse of the song vividly describes how the wind niches the flowers of the wild poppy (bulki) among the crosses that mark the graves of fallen soldiers. Therefore, the plant became a symbol of dead soldiers in the First World War. In many Commonwealth states, artificial, paper or plastic versions of this poppy are worn to commemorate the victims of veterans and civilians in World War I and other wars, during the weeks leading up to Remembrance Day on November 11. In the United States, it is customary to wear a "friendly poppy" (artificial, paper or plastic versions sold by Foreign War veterans during the weeks before Remembrance Day, the last Monday in May to commemorate veterans in many wars; November is here to honor living veterans). In Canada, the Canadian Royal Legion and the Anavets organization distribute poppies every fall before Remembrance Day. The Canadian poppy design consists of petals made of red plastic with a felt lining and a black center placed on a needle. In 1980, the Royal Canadian Legion set up a committee to decide on the future of poppies and decided to change the center to green to represent the green fields of France. This proved to be hated among the members of the Legion and the design was returned in 1986. Unfortunately, a large number of greens had already been purchased and it was decided to continue the production of green centers until the stock of felt was used up. It took 2002 to wear out the green felt and the traditional red centers reappeared. Those who were uninformed or forgot that black centers were used to design poppies from its introduction in 1921 to 1980 considered the change somewhat controversial. The California poppy, Eschscholzia californica, is a floral symbol of California.