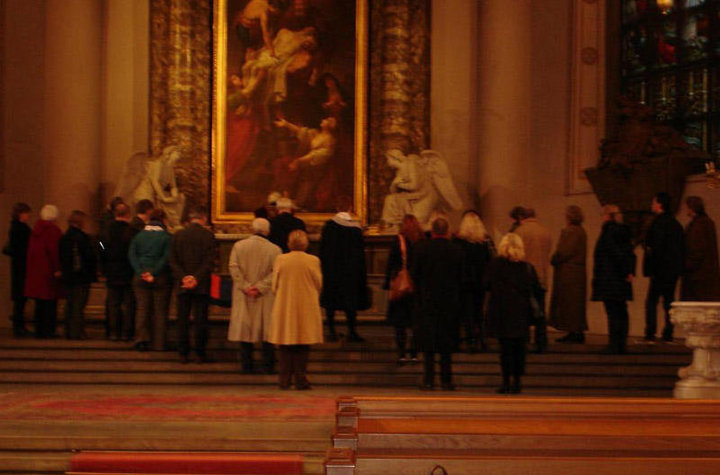 Karl Erik Vilhelm (Carl-Erik) Sahlberg, born October 22, 1945 in Hammerdal in Jämtland, died November 17, 2021 in Marangu in the Kilimanjaro region, Tanzania, was a Swedish priest and theologian. He was cathedral minister 1989–2009 and director 2009–2012 in St. Clara church in Stockholm. After his retirement in 2012, he was active in Tanzania, where he and his wife Overa ran 24 orphanages with a total of about 200 children. The orphanage activities take care of children who have lost their parents to AIDS.

Growing up and studies

Sahlberg grew up in Härjedalen and Jämtland and graduated in 1966 in Östersund. He was ordained to the priesthood in 1968 and served as a church assistant in Storsjö chapel 1968–1973 before resuming his theological studies. He defended his dissertation in church history at Uppsala University in 1977 on a dissertation on the Pentecostal movement and the newspaper Dagen, focusing on the years 1907–1963.

Prior to his doctoral degree, Sahlberg had been employed as a parish priest in Alsen's parish in Jämtland, where he worked from 1976–1983. Thereafter, he served as a missionary and church history teacher at Makumira Lutheran Theological College in northern Tanzania. The stay in Tanzania had been of great importance to Sahlberg's family, and together with his wife Overa Sahlberg, they ran a number of orphanages for children who lost their parents to HIV / AIDS in the 2010s. The operation served about 200 children in Uganda, Tanzania and Kenya.

During the period 1989 to 2012, Carl-Erik Sahlberg was active in St. Clara's Church, Stockholm Cathedral Parish, where he took the initiative for extensive diaconal work among the homeless and other seekers in central Stockholm.

In parallel with his activities in St. Clara, Sahlberg continued his academic activities and since 1995 taught church history at the Theological College in Stockholm, Saint John's College in Nottingham in England and Ersta Sköndal University and in missionary science at Johannelund Theological College. He was accepted in 1998 as an associate professor of church history at Uppsala University and published about fifteen books and writings.

When the Cairo Missionary Institute was founded in 1996, Sahlberg was one of the initiators and later also its director. The institute later merged with the Swedish branch of New Wine, and formed Cairo's New Wine, where Sahlberg was previously a member of the board and management team.

Sahlberg was nominated for several bishop elections and was one of five candidates in the archbishop election in the Church of Sweden in 2006. On January 28, 2009, he was awarded His Majesty the King's medal of the eighth size in high blue ribbon, "for significant contributions to the Church's social work".

Carl-Erik Sahlberg was married to Overa Sahlberg and had four children with her.

2008 From Storsjö chapel to Sergels torg