The drug war in Mexico 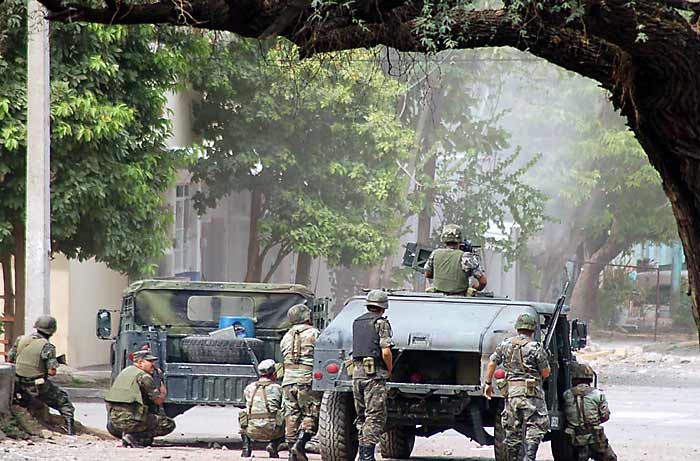 The drug war in Mexico is an armed conflict, and an ongoing major war, between rival drug syndicates in Mexico, where the state has also been a warring party. Mexican drug cartels have existed for a few decades, but became more powerful after the leading Colombian cartels, the Medellín cartel and the Cali cartel, disbanded and lost importance in the 1990s. Today, Mexican drug cartels dominate the drug market in the United States. Violence has escalated following the arrest of several key figures in the cartels, as the cartels fight for control of entry routes into the United States. Since 2006, the Mexican government has deployed both civilian and military forces in an organized campaign against drug cartels that have a well-organized paramilitary structure. Therefore, the conflict is sometimes categorized as an armed conflict. The number of deaths increased after large drug cartels were crushed and split into smaller cartels that began to fight with each other. The state's drug war, and rising revenues from the drug trade, have therefore contributed to the murder of a total of 35,588 people in Mexico in 2019, but many of the perpetrators belong to unknown groups. In 2019, 11,813 were considered fatalities in connection with battles between clearly identifiable groups according to the Uppsala Conflict Data Programs (UCDP), and the conflict in 2019 therefore met the definition of major war. UCDP are aware that their figure is low. Of these, 3 people died in battles where the state was an active party, the others in connection with violence between non-state groups. President Andrés Manuel López Obrador declared in January 2019 that the drug war was over, but the number of dead in armed conflicts has continued to increase after the. Ovidio Guzmán López, one of the leaders of the Sinoa cartel, was arrested in October 2019, but the president decided to release him a few hours after the cartel carried out a hostage-taking against the military and their families.

The crime syndicate Los Zetas was formed in 1999 by deserted elite soldiers and supports drug cartels. Over a 6-year period, 150,000 of the 250,000 soldiers in the Mexican army, most of whom are believed to have joined drug cartels, deserted, according to a 2010 report. but also grenade launchers. About 70 percent of the weapons are estimated to come from the United States. Mexico is large in the production and transportation of drugs, and it is from here that the majority of all cannabis and large parts of all methamphetamine imported into the United States come. Although Mexico accounts for a relatively small share of world heroin production, the country accounts for a large proportion of all heroin distributed in the United States. Mexican drug cartels control an estimated 70% of all foreign drugs imported into the United States. The US State Department estimates that 90% of all cocaine brought into the United States passes through Mexico; Colombia is the main producer of cocaine. It is also estimated that the total profit of illegal drugs ranges from 13.6 to 48.4 billion US dollars annually. Mexican drug traffickers are increasingly smuggling money back to Mexico inside cars and trucks, which is probably due to the fact that US authorities have greater control over electronic money transfers. Former Mexican President Felipe Calderón has said in a statement that the cartels seek to "replace the state" "and" try to impose a monopoly on weapons, and even try to impose their own laws ". US involvement in the conflict Since Mexican President Felipe Calderón took office in 2006, the Mexican government has declared an armed conflict against the escalating drug cartels. At the same time, Calderón began cooperating with the United States to support these drug cartels. An agreement was negotiated with the then