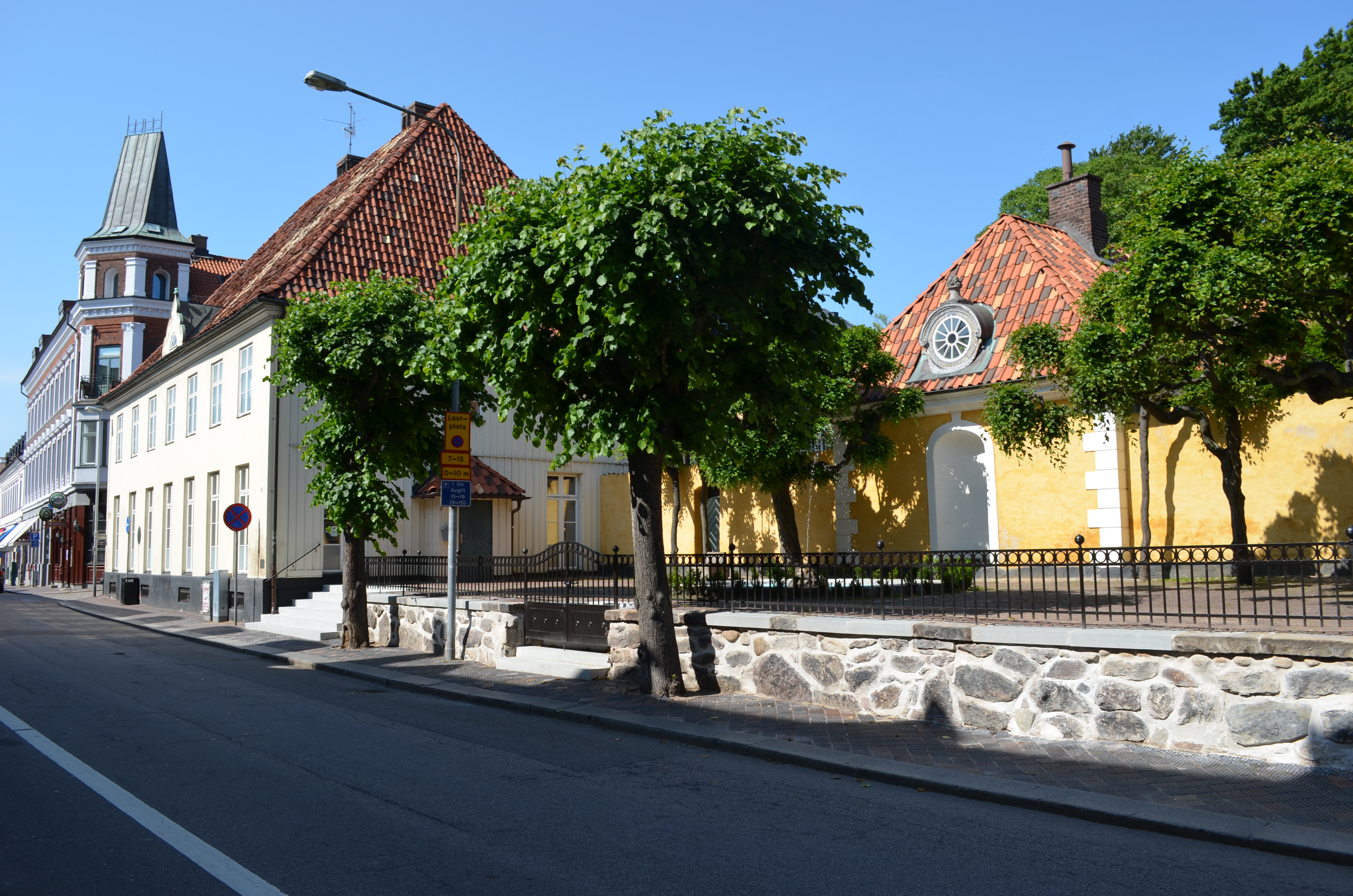 Henckelska gården is a listed building from the 17th century located at Norra Storgatan in Helsingborg. It got its current name from the merchant Fredrik Wilhelm Henckel who owned the farm in the middle of the 19th century. According to oral tradition, the farm was originally built in 1629 by the Danish king Christian IV. The farm was demolished during the Danish occupation of Helsingborg during the Scanian War and the current main building dates from 1681. It was then built in a traditional half-timbered style at the time, but the farm has been renovated and rebuilt on several occasions and the street facades are now made in a more neoclassical Gustavian style. . The farm is dominated by the main building on two floors with its high vaulted tile roof, and by its south-facing, terraced garden facing Norra Storgatan, which is a unique element in Helsingborg's cityscape. The entire farm, together with the gazebo located on the castle, was declared a listed building in 1978.

Henckelska gården is located in the Kärnan Norra district in the Old Town in the center of Helsingborg, on the plot which in historical documents is called Tomten N: o 49. The farm is located with Norra Storgatan on its west side and Springpostgränden to the north. Both streets are part of Helsingborg's historic street network. For a long time, Norra Storgatan, together with Södra Storgatan, was the city's most important thoroughfare, in Danish times called "Adelgaden", and therefore houses the only preserved older trading yards in addition to Henckelska gården: Jacob Hansen's house and Gamlegård. Since Kullagatan, the parallel street in the west and formerly an alley to Norra Storgatan, in the 1960s turned into a pedestrian street, Norra Storgatan has become increasingly quieter and conversely has more the character of an alley to Kullagatan. Springpostgränden was for a long time the city's main access road from the north together with Strömgränden, but the actual construction of the Henckelska farm separated them in the 1680s. The castle garden that surrounds the medieval tower Kärnan. The slope at the courtyard is heavily overgrown with greenery that encloses the courtyard to the east. To the south, the farm borders a neighboring property, the so-called Strömgården from around the year 1800, which faces a large firewall towards the farm. On the opposite side of Norra Storgatan, the farm faces Gamlegård, but also the driveway to the car park of the EPA house (Magnus Stenbocksgallerian) built in the 1960s and the gates to its loading docks.

Towards Norra Storgatan in the west, the farm's main building is on two floors, now in Gustavian style. The lower floor window consists of elongated cross-post windows that extend down to the plinth, where the two lower ceilings have two bars each, while the upstairs cross-post window has only one bar in the lower ceilings, as well as a parapet. All windows in the courtyard are white. The high roof consists of a selected gable roof with a slightly curved contour, clad in multicolored roof tiles alternating between yellow, red and reddish-brown tiles. Above the west façade's eaves is a centrally located, fully equipped decorative gable. The facades towards Norra Storgatan and Springpostgränden are plastered in light yellow plaster, while the façade towards the courtyard has the original half-timber exposed and the southern garden façade consists of light yellow painted moldings. The garden towards Norra Storgatan is raised from street level where it forms a small terrace. It is fenced by a black-painted cast iron fence facing the street and has three stairs that mediate the contact with the sidewalk below, one in the far south, one centrally located and one in the far north. In the garden there is a small parterre and a fountain, otherwise it is paved and on its eastern and western sides has t