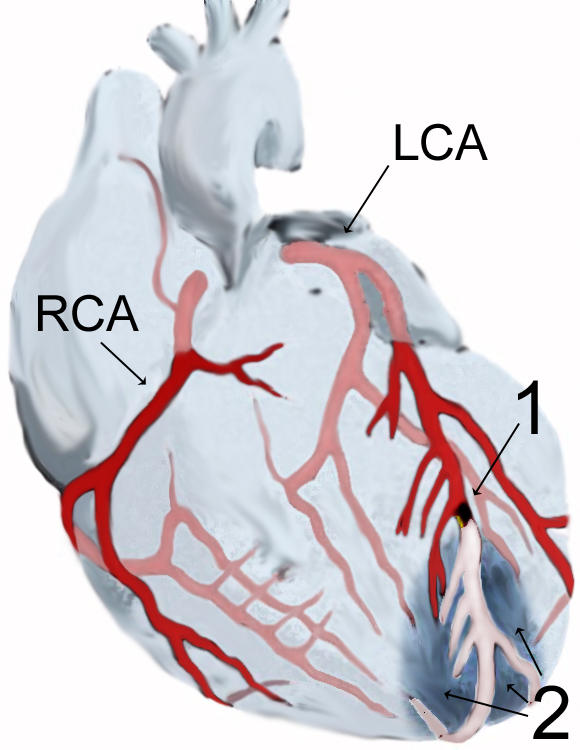 Myocardial infarction involves the loss of heart muscle cells caused by prolonged acute hypoxia (hypoxia), as a result of which a blood clot forms in the coronary arteries of the heart. This is often experienced as chest pain, but can also cause diffuse symptoms. Acute myocardial infarction is the most common cause of death in Sweden. Myocardial infarction is included in the concept of acute coronary heart disease together with unstable angina pectoris (angina) and sudden death triggered by cardiac arrhythmia, due to sudden lack of oxygen in the myocardium. Myocardial infarction can be described either according to which anatomical part of the heart is affected (for example a posterior wall or anterior wall infarction), according to how much of the heart muscle wall dies (transmural or subendocardial infarction), or according to what the ECG shows (ST-elevation infarction, non-ST -increase infarction). The predominant cause of heart attack is that an atherosclerotic plaque, a storage of fat in the vessel wall, breaks down. When the blood comes in contact with its contents, it coagulates inside the vessel and prevents blood flow. The risk of heart attack is increased by lifestyle factors, such as obesity, metabolic syndrome, smoking and stress.

The diagnosis of myocardial infarction requires evidence of acute myocardial injury; in the form of increased biochemical markers (usually cardiac-specific troponin I or T) with an increasing or decreasing trend; in combination with any of the following clinical signs of ischemia: Ischemic symptoms (usually central chest pain) Ischemic ECG changes (mainly ST elevations or ST decreases or development of pathological Q-wave) Image evidence of myocardial infarction (eg echocardiography findings with local movement impairment in the heart muscle) Detection of thrombus in the coronary arteries of the heart at coronary angiography or autopsy. However, a suspected ST-elevation infarction should be treated and treated only based on ECG and symptoms, before a response to troponin is obtained.

The most common symptom of a heart attack, especially in men, is severe and persistent chest pain. The pain can vary greatly in terms of location and duration. It can radiate to one arm or both arms, abdomen, back (back pain), neck, neck or jaws (so-called referred pain). The pain is differently strong, but it is persistent for a longer period. If the pain persists for at least fifteen minutes and is combined with nausea, cold sweats, shortness of breath, dizziness or fainting, the likelihood of a heart attack increases. However, pain may be the only physical symptom. It is common for the sufferer to feel very scared and anxious. Sometimes you have had angina the days or weeks before a heart attack. These symptoms are similar to those of a heart attack, but are milder and come in short attacks, often during or after physical exertion. It is typical that the pain disappears at rest. It is a warning signal which means that you must go to hospital immediately.

Women may have more diffuse symptoms

pain in the jaws feeling of heaviness or pressure in the chest stomach ache difficulty breathing or shortness of breath palpitation pain in the shoulder area dizziness and nausea weakness or severe fatigue general malaise.

The treatment aims to restore blood flow in the coronary arteries that have been closed. You also want to remove pain and anxiety, as this further aggravates the victim's condition. Acute morphine is therefore often given for pain and anxiety as well as oxygen to increase the blood's oxygen saturation. Nitroglycerin is given to dilate the coronary arteries of the heart and thus reduce the ischemia that has occurred in the myocardium of the heart, so this is both anti-ischemic and pain-relieving. In addition, beta-blockers are given which reduce the heart's rhythm and thus reduce the heart's need for oxygen, this reduces ischemia and thus also the pain. Acetylsalicylic acid found in, among others, Magne