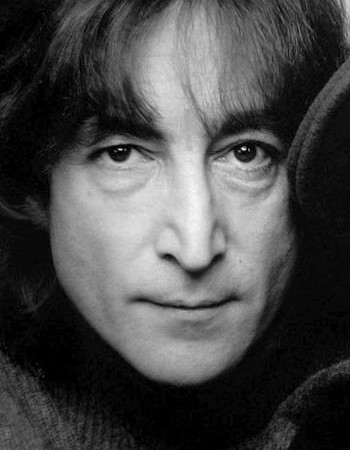 John Winston Ono Lennon, born October 9, 1940 in Liverpool, died December 8, 1980 in New York, was a British singer, musician and composer also one of the founders of the music group The Beatles. As a composer and singer, both in The Beatles and later as a solo artist, he is considered one of rock's great foreground figures, not least thanks to his collaboration with Paul McCartney in the songwriting duo Lennon – McCartney. John Lennon was a significant peace activist, something that gained an increasing appearance during the latter part of his career as a solo artist. He was also influenced by feminism. Lennon moved to New York in 1971. When he was on his way to his home on the evening of December 8, 1980, he was shot to death by Mark David Chapman.

John Winston Lennon was the only child in the marriage between Julia Stanley (1914–1958) and the sailor Alfred Lennon (1912–1976). He later had half-siblings through both his mother and father. His parents separated early and John lived while growing up with his aunt Mimi (1903–1992) and her husband George Smith (1903–1955). Lennon had a very good relationship with his mother Julia and she aroused his interest in music and taught him to play the banjo and piano. As a teenager, Lennon lost both his foster father and his mother Julia, who died in a car accident. This made him depressed for several years, but he also gained the strength to start creating music. Lennon's childhood was portrayed in the movie Nowhere Boy. It is about his relationship with his mother and his first meeting with Paul McCartney. He did not get in touch with his biological father until adulthood.

In 1956, Lennon formed the slate group The Quarrymen. Paul McCartney joined the band in October 1957. Lennon and McCartney became best friends and began writing songs together, which they continued well into the 1960s. Many of The Beatles' early songs were composed by Lennon and McCartney together, but over time they began to write more and more separately. In 1966, Lennon stated in an interview that "We are more popular than Jesus now." a statement that made him unpopular with devout American Beatles fans, who burned their Beatles records and he was forced to apologize while declaring that he did not mean to make any comparison between The Beatles and Jesus. Lennon has told that his son Julian came home with a drawing he drew in preschool. When asked what he imagined, Julian replied that it was "Lucy in the sky with diamonds" (Lucy was a preschool girl). Lennon was inspired and wrote a song about "Lucy in the Sky with Diamonds" which was released by The Beatles. In an interview much later, however, Paul McCartney, as many music critics also claimed and blamed the group for, admitted that the song was of course aimed at and was a tribute to the drug LSD that the members of the Beatles all tried. Lennon is also known that he was a significant peace activist who in many ways sought to create public opinion for peace on earth. Among other things, he recorded "Give Peace a Chance" with the help of many of the most famous artists of the time. Lennon is the author of three books: In his own write (In his own way, 1964), A Spaniard in the Works (1965) and Skywriting by word of mouth (Oral smoke signals, published posthumously 1986). He has left behind some famous quotes such as "Life is what happens to you while you're busy making other plans" from the lyrics to the song "Beautiful Boy (Darling Boy)".

Lennon entered into his first marriage in 1962 with Cynthia Powell (1939–2015), with whom he had been together since 1958. The following year, they had a son, Julian, who would also become a pop artist. However, the marriage was dissolved in 1968. They