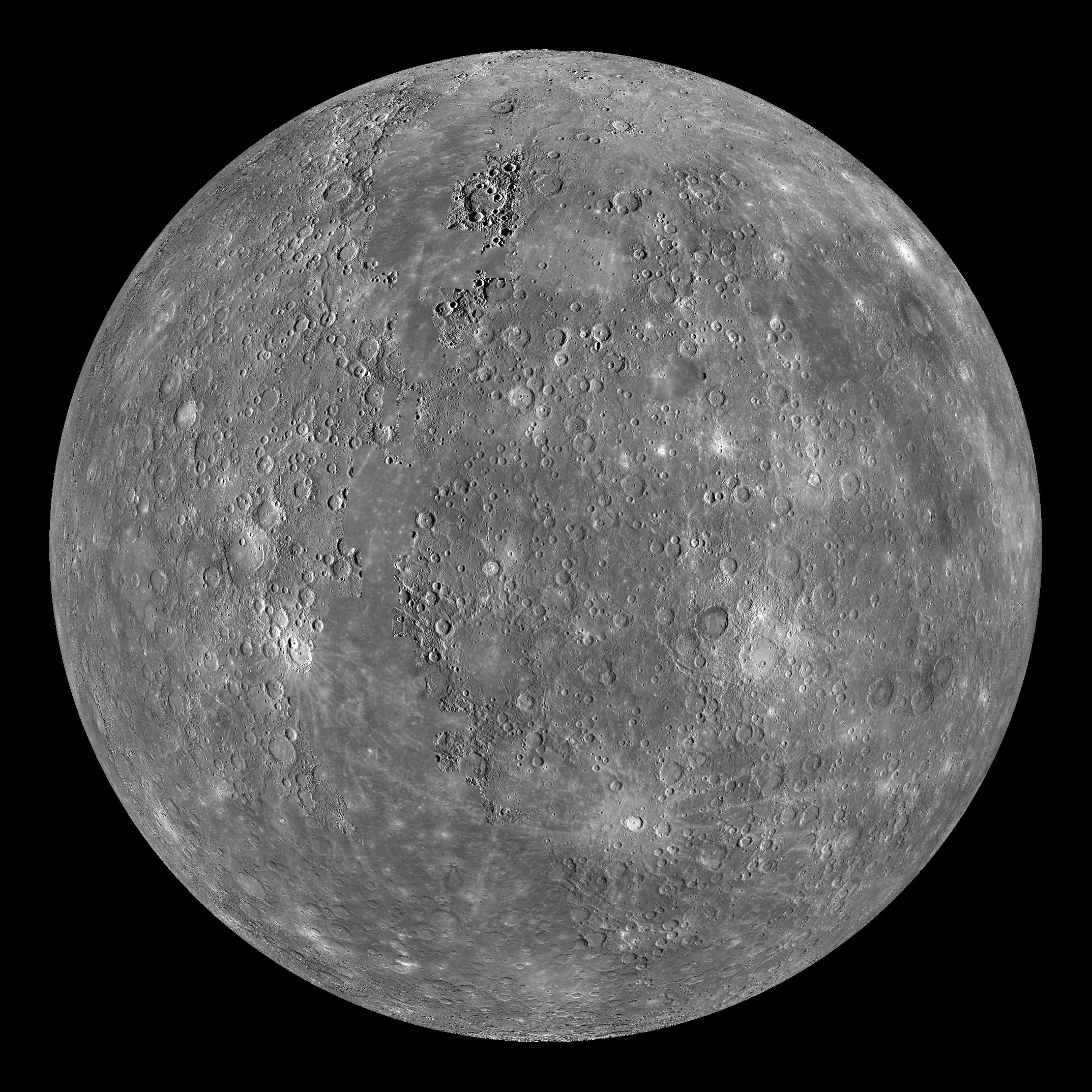 Mercury (symbol: ☿) is the innermost and smallest planet in the solar system, with an orbital period around the sun of approximately 88 days. Due to its proximity to the Sun, it is difficult to observe from Earth and can only be seen at dawn or dusk with the naked eye or with field binoculars. Mercury nevertheless has an observational history of at least 3,400 years, as it is documented in MUL.APIN, the Babylonian work dealing with Babylonian astronomy and astrology. Relatively little is known about Mercury. Much of the information about the planet was collected by the first space probe to visit, Mariner 10 (1974–1976). On January 14, 2008, however, the significantly more advanced MESSENGER probe passed the planet. Two more passages have been made by the probe. The surface is quite similar to the moon as it has relatively many craters. Mercury has basically no atmosphere, and the surface temperature varies between -173 degrees Celsius at the bottom of the craters at the poles and +427 degrees Celsius at the hottest places on the sun side. The planet, like Venus, lacks natural satellites (moons). The planet's name comes from the Romans, who named it after the Roman god Mercury. The astronomical symbol of Mercury is a stylized caduceus.

Mercury is one of the four rocky planets, which means that, like Earth, it has a solid surface in the form of a crust of rock. It is the smallest of the rocky planets, with a diameter of 4,879 kilometers at the equator, which is about two-fifths that of Earth. Mercury consists of an estimated seventy percent metallic substances and thirty percent silicates. The planet's density is the second highest in the solar system at 5.43 grams per cubic centimeter, only slightly less than Earth's 5.515 g/cm3. Mercury's uncompressed density is calculated to be 5.3 g/cm3 compared to Earth's 4.4 g/cm3.

Mercury's high density can be used to infer its internal structure. While Earth's high density is largely caused by the compression that the sheer weight of Earth's mass causes on its inner regions, Mercury is much smaller and not nearly as compressed. Thus, the conclusion can be drawn that the core must be very large in relation to the size of the planet and rich in iron. Mercury's core has been calculated to have a radius of approximately 2,030 kilometers and thus occupies approximately 58 percent of Mercury's volume, while Earth's core only occupies approximately 16 percent of Earth's volume. The large iron-rich core leaves only about 410 km for the outer structures of Mercury, of which the crust has been estimated to be about 20–50 km thick, roughly equivalent to the thickness of Earth's continental crust. A very distinctive detail of Mercury's surface is the large number of ridges, which in some cases extend over several hundred kilometers. They are thought to have formed when Mercury's core and mantle cooled and shrank after the shell solidified.Mercury has a much higher iron content than any other planet in the solar system. Several hypotheses have been put forward to explain Mercury's high metal content. The most accepted theory is that the ratio of metal divided by silicate was originally of the same order of magnitude as that of chondrite meteorites and the mass was about 2.25 times its present mass, but that the planet was struck early in the solar system's history by a planetesimal that had about one-sixth the mass of Mercury. This impact would have torn away a large part of the original crust and mantle, leaving the core alone. A similar theory has also been proposed to explain how the moon was formed. According to an alternative hypothesis, Mercury may have formed from the solar nebula before its energy production had stabilized. The planet would then have had about twice as much mass as it does now. Then, when the protosol expanded, the temperature near Mercury could have reached between 2,500 and 3,500 Kelvin,