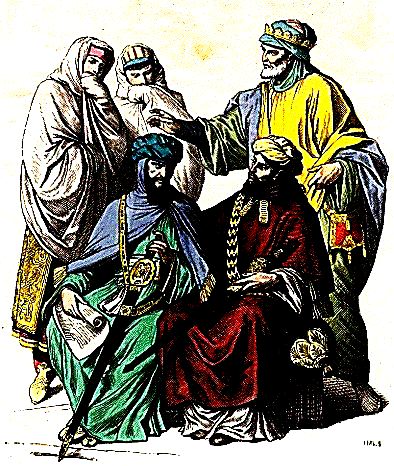 Moor was originally a term used by the Romans for the Berbers who inhabited what the Romans called Mauretania, and who was ruled by a clan that the Romans called the Moorish clan. Mors were then called the Muslims who during the Islamic expansion occupied and inhabited the Iberian Peninsula from the 700s until the end of the 15th century and founded al-Andalus. Most of these were not Arabs but came to the Iberian Peninsula from the neighboring western part of North Africa. The term mores has primarily been used loosely in Swedish as a term for Muslims or for Muslim minorities, and eventually for black ethnic groups in general. The word remains in Moorish, to describe architecture, art and clothing created during or influenced by Islamic expansion, especially on the Iberian Peninsula but also in North Africa and Sicily.

Although the Moors came to be associated with Muslims from the early Middle Ages, the name exists before Islam. It comes from the small numid kingdom of Maure from the 200s BC. in the present northern central and western parts of Algeria and parts of northern Morocco. . The name soon came to be used on the population from all over the region. The Greek historian and geographer Strabo wrote in his work Geographica: "they were called Maurisi by the Greeks and Mauri by the Romans" in the first decades AD During that time, the Moors, later the Moors, were trading partners with Carthage, the independent city-state founded by the Phoenicians. In the Second Punic War, 218-202 BC, between Carthage and Rome, the Moorish kings Syphax and Masinissa took sides. The former, Syphax, fought with the Carthaginians and Masinissa with the Romans, which was made clear at the Battle of Zama. After that, the Moors could enter into agreements with the Romans. Under King Jugurtha, Roman merchants were indirectly affected by violence during internal battles, leading to conflicts with Rome, while Juba II, a later king, kept peace with Rome. Eventually, the area was incorporated into the Roman Empire as the provinces of Mauretania Caesariensis and Mauretania Tingitana while the area around Carthage was already a province, Africa. Roman rule was sufficiently beneficial and effective for the provinces to be fully incorporated into the Roman Empire. During early Christianity, Tertullian and Augustine were two prominent Berber churchmen. After the fall of the Roman Empire, the vandals ruled over large parts of the area and a century later the rule was replaced by the Byzantine Empire. Neither the vandals nor the Byzantines exercised any effective rule and the hinterland was under Moorish-Berber control. During the Islamic expansion, the Berbers resisted the Arab armies for over 50 years. In the year 92 according to the Muslim calendar, that is, in the year 710, the Islamic expansion spread throughout North Africa. At the same time, the Islamic conquest had also taken place to the east, through India and Southeast Asia. When the Philippines was annexed by the Spaniards in the 16th century, the Muslim inhabitants were called moros. The Moors of the Iberian Peninsula The year 711 counts as the year the now Muslim Moors conquered the Visigothic Christian Hispania, the Iberian Peninsula. Under General Tariq ibn-Ziyad, most of the Iberian Peninsula came under Islamic rule during an eight-year campaign. They continued northeast across the Pyrenees but were defeated by the Franks and Charles Martell at Poitiers in 732. In the 750s, the young Muslim empire was ravaged by internal conflicts, which affected al-Andalus when the Abbasids replaced the Umayyads, but the latter created the Caliphate of Córdoba on the Iberian Peninsula and continued to rule the area for centuries. Although the number of Moors entering mainland Europe was small, many natives converted to Islam. At the beginning of the 13th century, as many as 5.6 million of the Iberian Peninsula's 7 million inhabitants professed Islam. Newly converted was called muladi, a word that was also used on people va