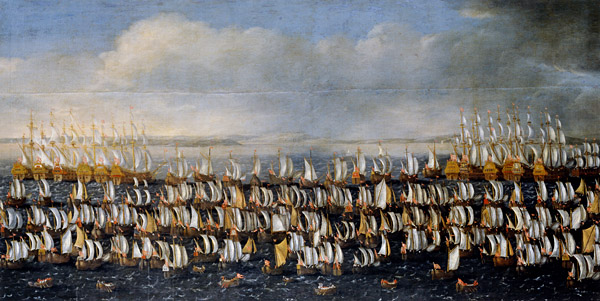 The Scanian War was a war 1675–1679 that took place between Denmark-Norway, Brandenburg and Sweden. The war took place mainly on Scanian and Bohuslän land, as well as in northern Germany. The war was caused by the Swedish intervention in the Franco-Dutch war. Sweden had allied itself with France against several European countries. The United Netherlands, which was attacked by France, sought help from Denmark-Norway. After some hesitation, King Kristian V began an invasion of Skåneland in 1676, while the Swedish troops were busy with a campaign against Brandenburg. The invasion of Scania was linked to a Norwegian front called the Gyldenløve feud, which forced the Swedish defenders to fight a two-front war in addition to their conflicts in the German-Roman Empire. The Danish goal was to reconquer Skåneland, which had been handed over to Sweden in peace in Roskilde, after Karl X Gustav's Danish war. The Danes made initial gains during their campaign, which was later stopped by King Charles XI's counter-offensive. The war had no definite victor; the Swedish navy lost at sea and the Danish army was defeated in Scania by the Swedes, who in turn were defeated by Brandenburg. The war and strife ended when Denmark's ally the Netherlands made peace with Sweden's ally France, and Charles XI married the Danish princess Ulrika Eleonora, sister of Kristian V. Peace was made on behalf of France with the treaties of Fontainebleau and Lund (Sweden and Denmark) and Saint-Germain (Sweden and Brandenburg), where it was agreed to return most of the conquered territories to Sweden.

After the death of Charles X Gustav, Sweden was led by a guardian government led by Magnus Gabriel de la Gardie, who got Sweden to enter into a military alliance with France. Earlier during the guardianship government, Sweden had tried to stand outside such alliances as far as possible and worked to maintain the balance of European politics, to avoid a war in which what was gained could be lost. In 1672, France attacked the Netherlands in the Franco-Dutch War and was thus drawn into a war with Spain, the German emperor and other German princes, including Brandenburg, and tried to get Sweden with them with the threat of non-subsidies if Sweden did not set up one here. in Germany. In 1674, a Swedish army marched into Brandenburg territory without declaring war. In June 1675, the Netherlands declared war on Sweden, while the German army lost a rather insignificant battle in Fehrbellin. Although the tactical military situation was hardly changed by this, the loss had shown that the Swedes were not invincible. This encouraged Sweden's enemies and drove them into action. The Elector of Brandenburg and the King of Denmark, Kristian V, promised each other not to make peace until Denmark regained what the country had lost through the peace of Brömsebro and Roskilde and also Wismar and Rügen, and the Elector received the rest of Swedish Pomerania.

In September 1675 came the Danish declaration of war. In September and October, Swedish Pomerania was occupied by Brandenburg and Denmark. The Danes occupied Wismar and Bremen-Verden, while the Brandenburgs occupied Stettin. In 1675, the Swedish fleet under the command of Gustaf Otto Stenbock left home port in Stockholm, but never got further than the Karlsöarna west of Gotland before it had to return due to bad weather, illness and loss of equipment. Capricorn was held personally responsible for the failure of Charles XI and was forced to pay for the expedition out of his own pocket. In the winter of 1675–76, the Swedish navy tried again, now under Lorentz Creutz, but was hindered by the thick ice that winter. A combined Dutch-Danish fleet operated against Swedish shipping on the Baltic Sea, and the whole of Gotland was conquered by Danish troops. Swedish fleet u