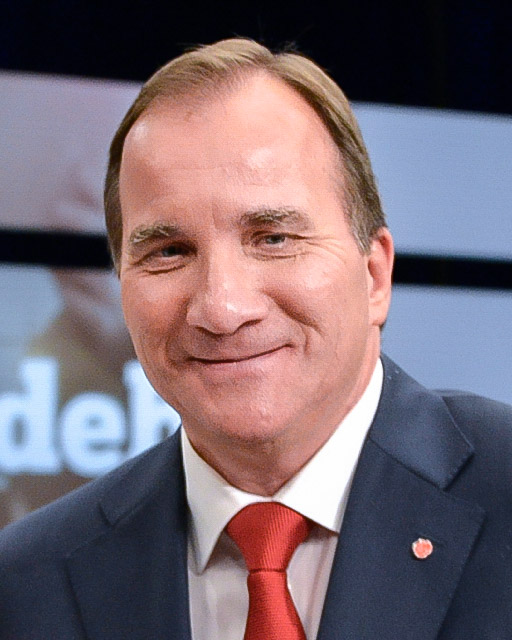 Kjell Stefan Löfven (Swedish pronunciation: [ɕɛl ˈstěːfan lœˈveːn]), registered Löfvén, born July 21, 1957 in Hägerstens parish in Stockholm, is a Swedish Social Democratic politician and Swedish Prime Minister in the years 2014-2021. He was party leader for the Social Democrats in the period January 27, 2012 - November 4, 2021, before that union chairman. Between 1 January 2006 and 27 January 2012, he was union chairman of the trade union IF Metall. Stefan Löfven was appointed Prime Minister on 2 October 2014 and took over as Sweden's Prime Minister on 3 October 2014. He succeeded Fredrik Reinfeldt at a cabinet meeting on 3 October 2014. Löfven I, a minority government consisting of the Social Democrats and the Green Party. After the 2018 parliamentary election, he was dismissed as prime minister after a prime ministerial vote showed that he did not have enough support in the Riksdag. After he was fired as Prime Minister on 25 September 2018, Löfven led a transitional government. On 18 January 2019, however, he was elected Prime Minister for a second term and presented the Löfven II Government on 21 January. On 21 June 2021, Löfven and his government were overthrown in a no-confidence vote in the Riksdag. Löfven is the first prime minister in Sweden's history to be overthrown by a no - confidence vote. On July 9, 2021, the government formally took over Löfven III at a government council after the Swedish Parliament voted two days before to tolerate Löfven as Sweden's prime minister. at the party congress in Gothenburg on 3–7 November 2021 and then ask to be dismissed as prime minister. The resignation as party leader took place on November 4, 2021, in connection with Magdalena Andersson being elected new party chairman. On November 10, Löfven asked the Speaker of the Riksdag to be dismissed as Prime Minister and Member of the Riksdag. The Löfven III government thus became a transitional government, until 30 November 2021 when the Andersson government took office.

Stefan Löfven was born in Aspudden in Stockholm, but came ten months old as a foster child to Sunnersta in Ådalen in the current Sollefteå municipality, when his mother Margareta Löfven (1922–2000) could not keep both her children. Prior to that, he had been at Nybodahemmet's orphanage. His father Karl Hedberg (1904–1959) died early without meeting his youngest son. The foster father Ture Melander (1926–2003) was a forest worker and then a factory worker and the foster mother Iris Melander (1929–2020) worked in the home care service. In the foster family there was also a sister and a brother. Growing up, he played ice hockey and worked as a municipal mower and timber sorter. Inspired by Olof Palme's international involvement, he was involved in starting a local SSU association, of which he later became chairman. He did his military service on Jämtland's air flotilla (F 4) in Östersund for 11 months in the years 1976–1977. Conscription consisted of basic training on F 4 in Östersund, then a radar observer training at the Swedish Air Force's Södertörn schools (F 18) in Tullinge south of Stockholm, to then get a job at a radar station just outside Sollefteå called R 46, on the way to Bollsta.

At the age of 22, Löfven was reunited with his mother and older brother, Ulf Löfven, after having had correspondence before that. It was only when he himself learned that the family name of the rest of his family is pronounced with emphasis on the first syllable and not spelled with any accent. Probably in connection with the foster home placement, someone outside has assumed that the name would be spelled with an accent over the e and reported his name to the population register spelled that way. Löfven himself believed then