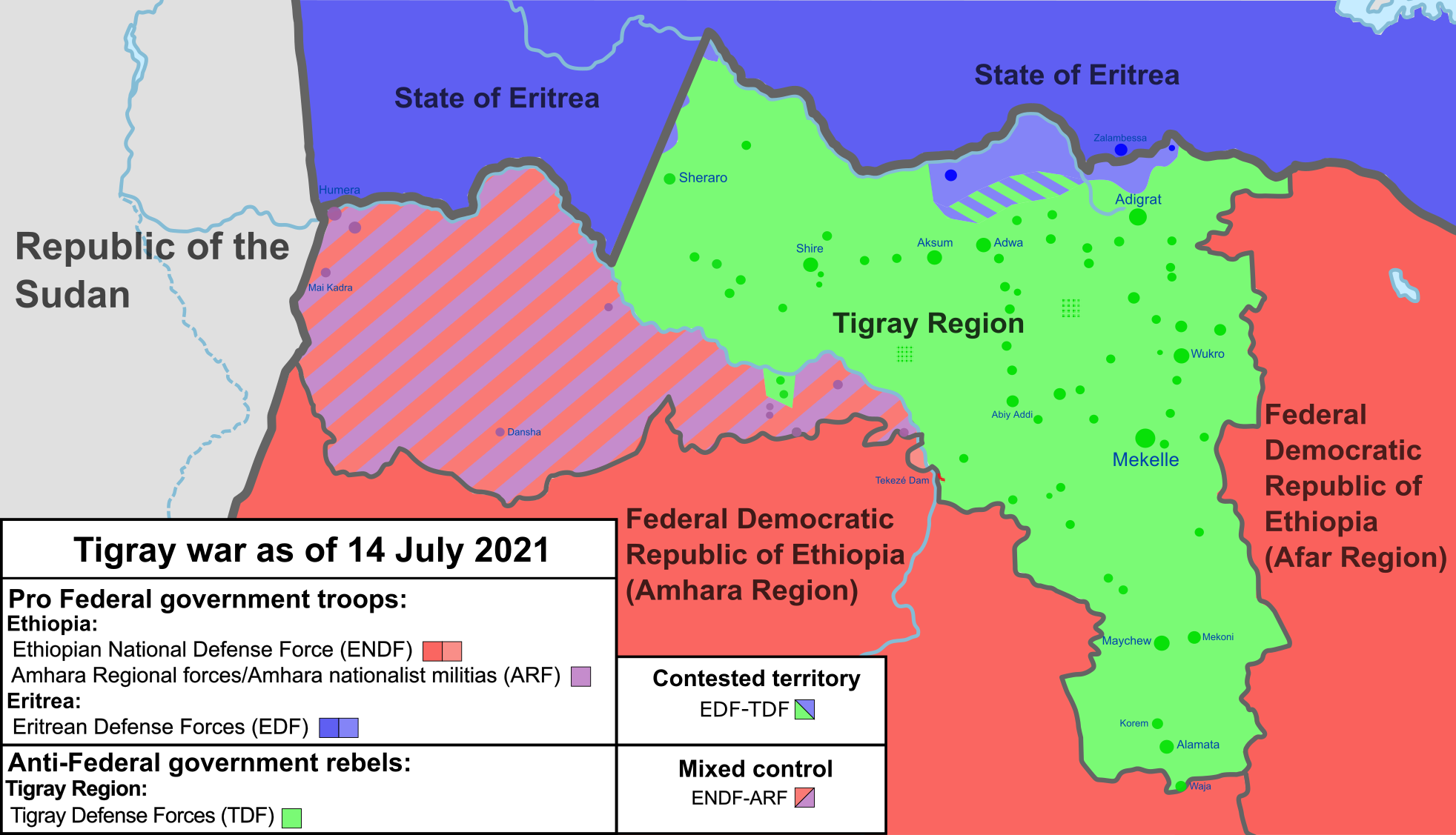 The Tigray War is an ongoing major civil war that began at midnight on 3-4 November 2020 in the Tigray region of Ethiopia. It is fought between the Tigray Defense Forces (TDF) and the Ethiopian National Defense Force (ENDF). The latter are supported by the Ethiopian federal police and regional police and gendarmerie forces in the neighboring Amhara and Afar regions. It is also confirmed that the Eritrean Armed Forces (EDF) has been heavily involved. Additional support for the Ethiopian military has also been provided by the United Arab Emirates through drone strikes. Several war crimes have taken place in connection with the war. Although both parties have denied involvement, only the Tigrian leadership has called for an independent inquiry. Several attempts at independent investigation from the outside world have been denied by the Ethiopian government. Civilian massacres took place in November and December 2020 and the conflict has developed into an incipient humanitarian catastrophe. Armed conflicts have also spread to some extent, mainly in Sudan but also in Somalia. A large number of Ethiopian refugees have crossed the border between Ethiopia and Sudan. There have been border clashes since December 15, 2020 between Sudanese armed forces and Ethiopian militias in the Abu Tyour area. To distance Ethiopia's policies from ethnic federalism and ethnic nationalist policies, in 2019 Ethiopian Prime Minister Abiy Ahmed merged the ethnic and region-based constituent parties of the Ethiopian People's Revolutionary Democratic Front (EPRDF) coalition and several opposition parties into his new Prosperity Party. The People's Liberation Front in Tigray (TPLF), a politically influential force that had dominated Ethiopian politics for 27 years as a state-supporting party, did not want to join the new party. The TPLF then claimed that Abiy Ahmed remained without legal support because the general election scheduled for August 29, 2020 (which the House of Representatives had already postponed twice before the COVID-19 pandemic from its regular election date in May 2020) was once again amended by him to 2021. TPLF, led by its chairman Debretsion Gebremichael, went on to hold regional elections in Tigray in September 2020, in violation of the federal government, which then declared the Tigray elections illegal. 2020 against the Northern Command bases and ENDF headquarters in the Tigray region by TPLF loyal security forces and with counterattacks by ENDF in the Tigray region on the same day, which federal authorities described as a police action. Federal forces captured the capital, Mekele, in the Tigray region on November 28, after which Prime Minister Abiy declared the Tigray operation "over." The TPLF stated at the end of November that they would continue to fight until the "invaders" were out. The TPLF had previously stated that it no longer recognized the legitimacy of the Ethiopian central government. During the summer of 2021, TPLF recaptured most of Tigray, including Mekele. In October, the fighting escalated again. Government forces launched a flight offensive over Tigray. TPLF moved south and was said to have taken control of two strategic cities in the Amhar region. By early November, the TPLF had captured two strategically important cities about 400 km from Addis Ababa. The central government in the capital announced a state of emergency.

After the end of the 1991 Ethiopian Civil War, Ethiopia became a country led by a dominant party, the Ethiopian People's Revolutionary Democratic Front (EPRDF), a coalition of ethnically based parties founded by and dominated by the Tigray People's Liberation Front (TPLF). The chairman of the TPLF was Meles Zenawi, who was the Prime Minister of Ethiopia until his death in 2012. On April 2, 2018, the once powerful TPLF lost power in the federal government due to a growing lack of