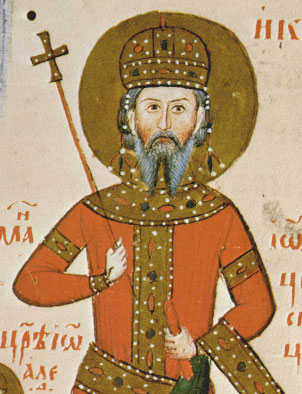 Tsar Ivan Aleksandr (Bulgarian: Иван Александър, photographed as Ivan Aleksandǎr, traditionally spelled: ІѠАНЪ АЛЄѮАНдРЪ), sometimes referred to in English as John Alexander. Was Emperor (Tsar) of the Bulgarian Empire from 1331–1371. His birth date is unknown. Knowing only the date of his death, which falls on February 17, 1371, his long reign marked an important turning point in medieval Bulgarian history. where he had to deal with internal problems and external threats. especially from the Byzantine Empire and the Serbian Empire. which is the neighboring territory of Bulgaria He also played a key role in economic recovery. Bulgaria's art and religion as well. However, in the latter days, Tsar Ivan Alaksander was unable to cope with many of the problems that arose. especially the dangers of the Black Death Ottoman invasion and invasion of the northwestern part of the country by the Kingdom of Hungary facing these problems in vain He had divided territories among his two sons, which led to the weakness and division of the Bulgarian Empire. along with the encounter with the expanding power of the Ottoman Empire

The first phase of the reign

Zar Ewan Alaksander He was the son of Despot of Karin, whose ancestors were descended from the Asean dynasty. and Princess Garatsa Petritsa, sister of Tsar Mikhail. shishman of bulgaria So Tsar Iwan Alaksander therefore has a relationship with the King.