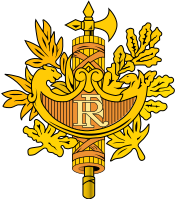 The President of the French Republic (French: Président de la République française) is the highest elected executive branch of France. and served as head of state, commander-in-chief, constitutional endorser and co-ruler of Andorra. The presidency of France was established in 1848 (under the Second French Republic), which made France's presidency. It is one of the longest-standing regimes in Europe. until now There are a total of 25 people in this position, all of whom have resided in the Palais de Lelyse. constitution in that republic The powers and responsibilities of the President have been defined differently. Since 1959, France was in the fifth era of the French Republic in a semi-presidential regime. The current President of France is Emmanuel Macron, who took office on May 14, 2017.

The Fifth Republic of France is a semi-presidential regime. Unlike many other European countries, the president himself has considerable power, although for the most part the oversight and legislative work of the prime minister and parliament. But the president has influence too. The president's supreme power is to appoint the Prime Minister. However, the French parliament has the power to dismiss the cabinet. This makes the president as if forced to elect a prime minister supported by Congress. When does a majority in parliament have the opposite political opinion of the president? which will lead to joint management when