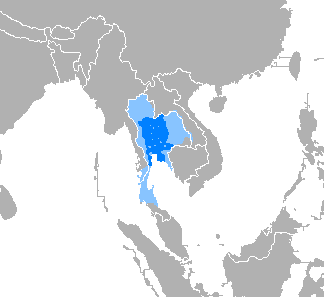 Thai is a sub-branch of the Kra-Tai language family. Thai language is closely related to other languages ​​of the Southwestern Tai family such as Lao, Phutai, Kham Muang, and other Tai languages, as well as other Tai languages ​​such as Zhuang, Mao Nan, Pu Yi, etc. Lai, spoken by indigenous peoples from Hainan, Guangxi, Guangdong, Guizhou, and Yunnan to northern Vietnam. It is assumed that the origin of the Thai language is probably from that area. Around the 13th-15th Buddhist century, there was an immigration of Tai language speakers from southern China. to Southeast Asia by bringing down the Tai language group as well The language spoken by these Tai people has been traced back to the original Southwestern Tai language. which was later influenced by the Austro Asiatic language family spoken by the Austroasiatic (Mon