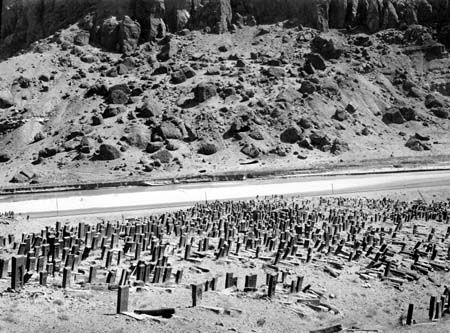 Armenian cemetery in Julfa Armenian: Ջուղայի գերեզմանատուն, Jughayi gerezmanatun) is a former cemetery near the city of Julfa. (also known in Armenian language as Juja) in Nakhchivan Azerbaijan A former cemetery of more than 10,000 tombs adorned with distinctive Armenian Christian tombstones called khachkars, the Azerbaijan government ordered its demolition and demolition. Gravestones and cemetery areas have been removed so that nothing remains, except for some ghashkars salvaged in other countries. A number of lawsuits have been filed by both Armenian authorities and international organisations, condemning and urging the Azerbaijan government to halt the process of destroying the mausoleum. these claims It states that members of the Council of Europe will come and will continue to take action on the issue. It also said it would allow inspections if the Council of Europe also inspected the territory occupied by Armenia. War and Peace have traveled to the former cemetery. It said no traces were left to indicate the area used to be a cemetery or building. And in the same year, photographs from Iran showed that the cemetery was used as a shooting range by the army. The destruction of the cemetery was described by Armenians as a cultural genocide in 2010, the American Society for the Advancement of Science reported the results of a comparative study of satellite images of the Chulfarah area.