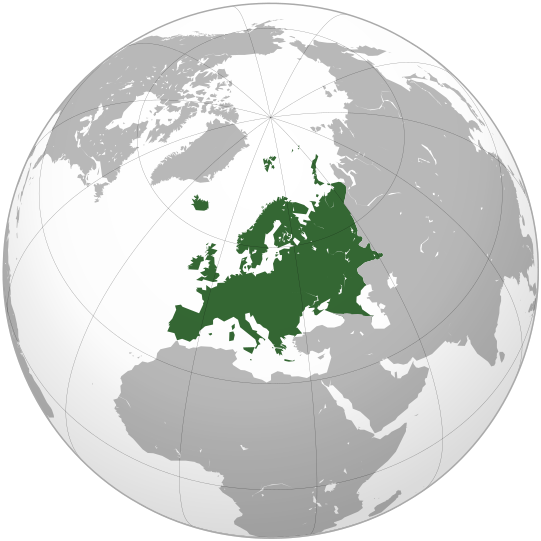 Europe (sometimes also Europe) is part of the world in the Northern Hemisphere. It is bordered by the Arctic Ocean in the north, the Atlantic Ocean in the west and the Mediterranean Sea in the south. In the east and southeast it is separated from Asia by the Ural and Caucasus Mountains, the Ural River (according to another version, Emba), the Caspian and Black Seas. Area - 10,180,000 km2, which is 2% of the Earth's area or 6.8% of land. The third most populous part of the world after Asia and Africa (729 million people, 11% of the world's population). Ukraine is the largest country in Europe, excluding the European part of the Russian Federation, which is a Euro-Asian country, the Vatican - the smallest. In addition to geographical significance, it can denote the European Union, European civilization, cultural community or European geopolitical choice. Europe together with Asia forms Eurasia.

Name and its etymology

According to the current spelling (as well as its previous editions), the only correct spelling is Europe. Some historical spelling systems have recommended writing from E-, in particular: Zhelekhivka ("Russian Spelling" by Smal-Stotsky - 1892), Kharkiv spelling (1926, 1928), spelling Zilinsky (1942, 1943), spelling Yaroslav Rudnytsky (1949).

Europe is named after the heroine of ancient Greek mythology, the Phoenician princess, who was kidnapped by Zeus and taken to Crete. The origin of this name, according to French linguist P. Chantren, is unknown. The most popular etymological hypotheses in modern literature have been proposed since antiquity (among many others), but are controversial: One of the etymological hypotheses interprets its origin from the Greek roots of Hebrew and Ops as "wide-eyed". According to the lexicographer Gezihi, the name Europe means "country of the west, or dark", which later linguists compared with the West-Sem. 'rb "sunset" or akkad. erebu with the same meaning. M. West, however, assesses this etymology as very weak.

Europe and Asia make up the continent of Eurasia, occupying 8% of the land surface; the area of ​​Europe is 10,532,000 km2. Europe lies entirely in the northern hemisphere between 36 ° N. w. and the Arctic Ocean. Almost 2/3 of the territory is occupied by the plain: from the European part of Russia in the east (Eastern Europe