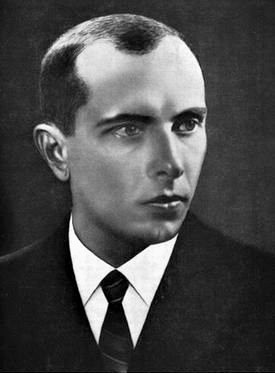 Stepan Andreevich Bandera (January 1, 1909, Stary Uhryniv, now Kalush district, Ivano-Frankivsk region, Ukraine - October 15, 1959, Munich, Bavaria, Germany) - Ukrainian politician, one of the leading ideologues and theorists of the Ukrainian nationalist movement of the XX century , after the split of the Organization of Ukrainian Nationalists - Chairman of the OUN-B. As an active member of the UVO and the OUN, he has a legally defined status as a Fighter for Ukraine's independence in the twentieth century. Stepan Bandera and Yaroslav Stetsko were the authors of the Act of Restoration of the Ukrainian State on June 30, 1941. On July 5, 1941, Bandera was placed under house arrest, and on September 15, 1941, he was placed in the central Berlin prison. From the beginning of 1942 to August 1944 he was in the Sachsenhausen concentration camp in the Zellenbau bunker in relatively comfortable conditions. In September 1944, he was released and offered to take part in the leadership of the anti-Soviet armed movement in the rear of the Red Army, but Bandera rejected the offer and refused to cooperate. In April 1944, S. Bandera and Yaroslav Stetsko discussed the task of subversive activities against the USSR with the head of the Wehrmacht's secret operations, Otto Skorzeny. Representatives of the OUN (b) and the UPA, formed by the OUN (b), were negotiating, beginning, and continuing to cooperate with the Germans, although other UPA units were still at war with the Nazis in 1944. The Soviet government authorized the KGB to assassinate Stepan Bandera. , Germany. This was done by Soviet agent Bohdan Stashinsky on October 15, 1959. Stepan Bandera's assessments are extremely contradictory. After the collapse of the USSR, his name became a symbol of the struggle for Ukraine's independence for many Ukrainians. Instead, many people in Poland and Russia are extremely negative about it, accusing it of fascism, terrorism, radical nationalism, including the physical liquidation of leaders of Ukrainian nationalist currents other than the OUN (b), and collaborationism. The definition of "Bandera", derived from his name, gradually became common and applicable to all Ukrainian nationalists, regardless of their attitude to Bandera.

He was born on January 1, 1909 in the village of Staryi Uhryniv, now in the Kalush district of the Ivano-Frankivsk region.