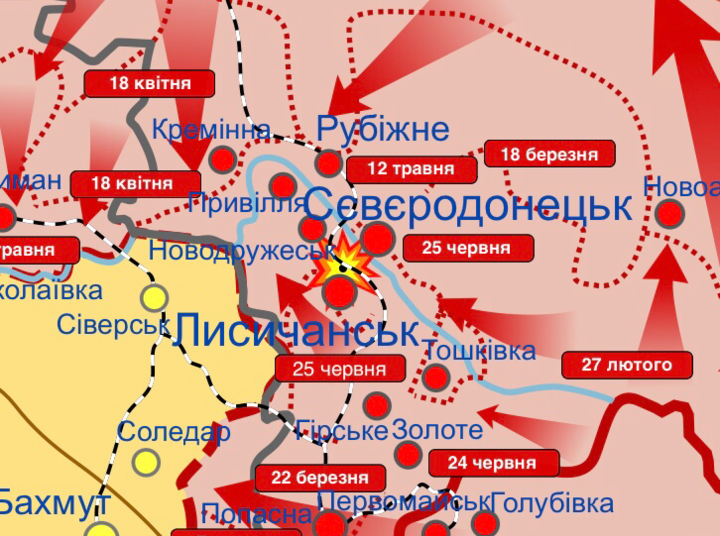 Around 15:00 on February 28, Russian troops began shelling Severodonetsk. According to Serhii Gaidai, the head of the Luhansk OVA, one person died and several others were injured. Gas pipelines were damaged during the shelling.

On March 2, battles took place in almost all villages near Severodonetsk. Russian troops continued to shell the city, including the school gymnasium, which served as a bomb shelter. There was no official information about the dead. At 3:20 p.m. that day, Ukrainian officials said that Russian troops tried to enter the city, but were repulsed. As a result of the hostilities, the Eastern Ukrainian University named after Farther. University buildings were also hit by artillery fire: in early April, one of the buildings was damaged by a shell from the Russian invaders. The lecture hall was destroyed in the laboratory building. In another place, the projectile broke through three floors at once. On March 11, in Kreminnaya, Luhansk region, the Russian military fired at close range from a tank at a home for the elderly, as a result of which 56 people were killed, and another 15 people were kidnapped by the occupiers.

On the afternoon of April 6, the Russian army launched an artillery attack on the old districts of the city. The flames engulfed 10 high-rise buildings. On April 9, the Russians shelled the city again, and a multi-story residential building caught fire. On April 10, Russian invaders continued shelling the city, two residential buildings, as well as a private clinic, were seriously destroyed. The social and critical infrastructure of Severodonetsk has already been almost destroyed. On April 11, one of the humanitarian assistance centers created in Severodonetsk by volunteers, for