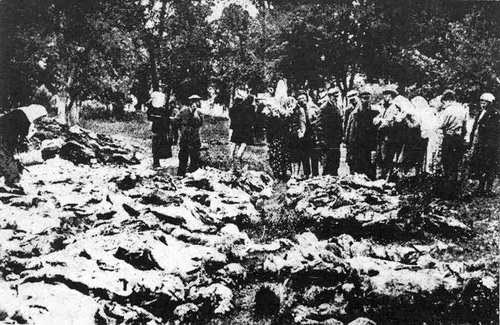 The Great Terror is the name of the era in the history of the USSR (1937-1938), when Stalin's repressions were sharply intensified and brought to the maximum of their intensity. Another common name of this historical period — "Yezhovshchyna" — is connected with the fact that Mykola Ivanovich Yezhov was the head of the People's Commissariat of Internal Affairs at that time. The Great Terror was named after Robert Conquest's book The Great Terror: Stalin's Purge of the Thirties (1968). Abroad, the term "The Great Purge" is common.

Mass terror of that period was perpetrated by the then government of the country throughout the territory of the USSR, as well as in Mongolia and Tuva, on the basis of the numbers of "planned tasks" "dropped into place" by Mykola Yezhov to identify and punish the so-called enemies of the people. The rapid increase in the number of those executed was indicative: 1,118 people in 1936 and 353,074 people in 1937. During the campaign, prisoners were subjected to torture as widely as possible, and execution sentences, which were not subject to appeal, were often handed down without any trial by the Troikas of the NKVD and immediately executed. Relatives of convicts were repressed for the mere fact of being related to them. The children of the repressed, who were left without parents, were placed in special "children's homes for children of enemies of the people", or so-called "children's gulags" in modern research. The organizers of the Great Terror staged a number of show trials, the most famous of which are the Moscow trials against representatives of the elites in politics , military, economy, state apparatus, science and culture. Covert "mass operations" from mid-1937, which affected the so-called Kurkuls, "socially harmful" and "socially dangerous elements" and ethnic minorities, caused most of the victims of the terror. Three years after Stalin's death, the then First Secretary of the Central Committee of the CPSU, Nikita Khrushchev, in a secret speech at the 20th party congress in 1956, touched on the topic of "political purges" against party members. Mass operations still remained a state secret. Only after the collapse of the Soviet Union and the opening of access to secret archives did it become possible to grasp the scope and depth of the Great Terror. In the studies of the Great Terror for a long time, there remained contradictions regarding the number of victims and its extent