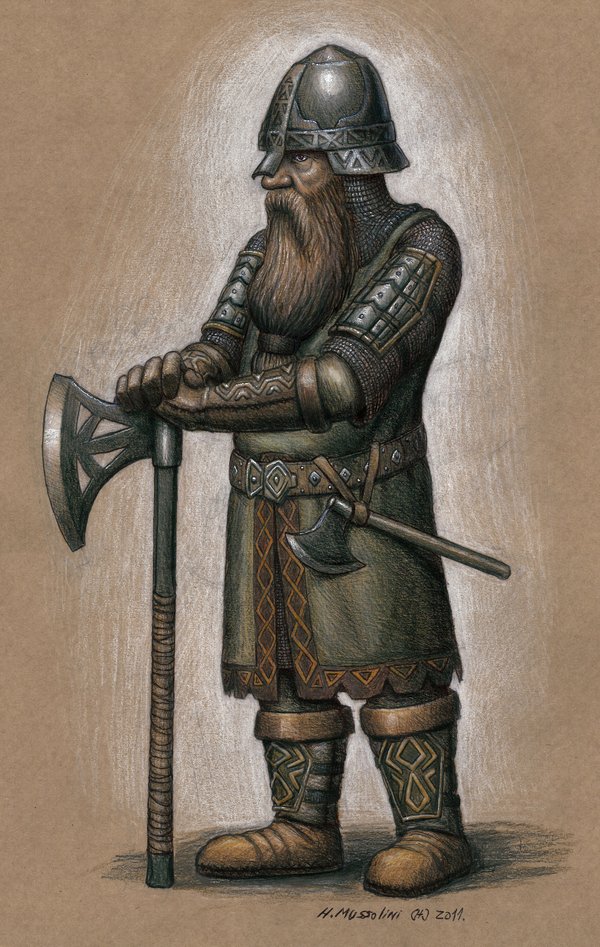 Dwarves (Ukrainian: Dwarves) are a race in the legend of John Ronald Reuel Tolkien, one of the Free Peoples of Middle-earth, created by Valar Aule. Miners and ore miners by birth, the best among mortals are jewelers, blacksmiths and stonemasons. This race was small and slowly multiplied. Elves and many people believed that gnomes come out of stone, which is not true. This can be explained by the fact that there were very few women among the dwarves, they rarely came to the surface and did not differ much from the young dwarves - men. Dwarven women, as a rule, loved once and did not always marry, because they often dreamed of those whom they could not marry, and did not look at others. Men also love work more than family comfort. The elves were also convinced that gnomes would turn to stone after death, but the gnomes themselves were convinced that their souls would go to separate halls of the Palaces of Mandos, where their creator Aule prepared another fate for them after death. In addition to their well-known name, the dwarves had a second secret, and in addition to Westerns, they spoke their difficult-to-speak language, which was not taught by any outsiders, and only a few foreigners knew it. In the "Purple Book" from it appear only the geographical names of the mountains near Moria called the Gimli to his friends and his battle cry in the battle of the Hornburgs Baruk Kgazad! Kgazad ai - menu! " "Dwarf axes are coming at you!"

History of the origin of gnomes

According to Silmarillion, Aule was eager to see the Iluvatar Children (elves and humans) join the Horde, so without waiting, he created his own creatures out of stone, which, however, did not have their own will and mind. They moved only when Aule forced them to do so by force of thought, and at other times stood dead. Seeing the unnaturalness of his creation, Aule came to Iluvatar with an apology and decided to destroy his creatures, but they suddenly began to ask to pity them. The Iluvatar era took pity on Aule and his creatures, and breathed life into the stone creatures, who became dwarves. However, Eru imposed certain restrictions: the dwarves had to fall asleep and wake up only after his firstborn appeared in the Horde.