Calendar of the Romans 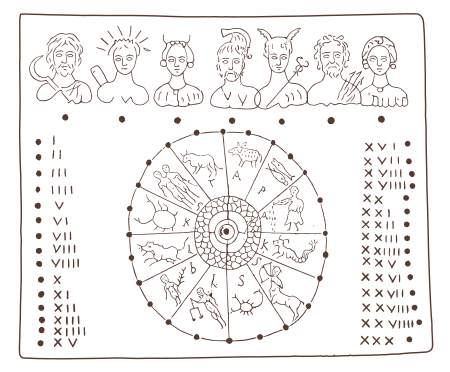 The Roman calendar was originally a ten-month calendar that existed from the founding of Rome until the fall of the Roman Empire. The calendar is based on the lunar calendar. Like their Greek neighbors, the ancient Romans determined the beginning of their work by the sunrise and sunset of individual stars and their groups, that is, they connected their calendar with the annual change in the appearance of the starry sky. At the same time, the sunrise and sunset (morning and evening) of the Pleiades star cluster, which in Rome was called the Virgils, were almost the main "landmark". The beginning of many field works here was also associated with favonium, a warm westerly wind that begins to blow in February (February 3-4 according to the modern calendar). According to Pliny, it marks the beginning of spring in Rome.

During the reign of the legendary founder of Rome, Romulus, in the middle of the 8th century. to n. e. the Romans used a calendar with ten months, which were indicated by serial numbers and had no names. The year began almost with the vernal equinox. At the end of the 7th century to n. e. some months received names: 1. Martius, Latin Martius - in honor of the war god Mars. 2. April, lat. Aprilis - to "reveal", to wake up. 3. Maius, lat. Maius - in honor of the goddess Maia - the mother of the god Hermes. 4. Junius, Latin Junius - in honor of the goddess Juno, wife of the god Jupiter. The rest of the months kept the names of ordinal numbers: 5. Quintilis, lat. Quintilis is the fifth. 6. Sextilis, Latin. Sextilis is the sixth. 7. September, Latin. September is the seventh. 8. October, lat. October is the eighth. 9. November, Latin. November is the ninth. 10. December, Latin. December is the tenth. Four of them: Martius, Mayus, Quintilis, and October consisted of 31 days, and the rest consisted of 30 days. Therefore, the calendar year had 304 days, which did not correspond to a large extent to the length of the tropical year.

Numbers of the month

The Roman designation of the numbers of the month was based on the selection of three main days in it, initially associated with the change of phases of the moon: 1. The 1st day of each month is Kalendae (Kalendae or Calendae, abbreviated Kal., Cal.). First, the first day of the new moon, which is announced by the high priest (from the Latin verb calare - to call, in this case to announce the new moon). 2. The 5th or 7th day of the month — Nonae (abbr. Non.). The day of the first quarter of the month (from the ordinal number nonus — the ninth, 9th day before the Eids, counting the days of Non and Eid). 3. Thirteen�